From wicked to wonderful 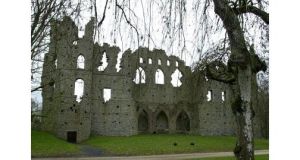 Belvedere House, Mullingar, Co Westmeath was originally built as a hunting lodge. The grounds include the Jealous Wall (above), one of the finest follies in the country.

The 'wicked earl' left a fairytale legacy in the form of Belvedere House and gardens, an architectural gem, with great amenities for children, writes Eileen Battersby.

A cruel husband accuses his neglected young wife of committing adultery with one of his brothers. The innocent sibling flees the country. The unfortunate wife of the vengeful lord, forced into making a false confession, spends more than 30 years as a despised prisoner in her own home. Meanwhile, the husband, a selfish cad and man about court who later builds a great wall to blot out the view of another brother's large new house, creates for his own use a gracious villa, majestic in its lakeside setting and surrounded by rolling parkland.

On the death of the evil lord, the imprisoned widow's by-then grown children rush to free her. Alas, weakened by years of mental turmoil, the once lovely girl has become a deranged hag incapable of recognising her own sons.

As a story it could belong to the European tradition of darkly menacing fairy tales. But the unhappy life of Mary Molesworth is no fiction, merely a chapter in 18th-century Irish social history.

It was her tragedy to have, as a 16-year-old possessed of beauty and little wealth, attracted the dastardly Robert Rochfort, the first earl of Belvedere, one of 11 children born to George Rochfort, a friend of Jonathan Swift. Robert Rochfort, whose infamy as a husband would earn him the title of the wicked earl, had lost his first wife to smallpox after one year of marriage.

Soon after taking Mary as his second wife, problems emerged and Robert had little interest in living with her at the Rochfort seat, Gaulstown, in Co Westmeath.

Instead he roamed the London and Dublin royal courts pursuing a bachelor lifestyle. The most efficient way to relieve himself of an unwanted wife was to disgrace her. This was achieved thanks to support provided by another brother. She became an outcast trapped in Gaulstown. Rochfort paraded his bogus indignation.

Some five miles away, he created Belvedere House, designed by Richard Castle and built about 1740, on a spectacular site overlooking Lough Ennell. Devised as his hunting lodge and all-male retreat, Belvedere, as its name suggests, was, and remains, lovely to look at. The first earl of Belvedere caused immense unhappiness to his family, but ironically has left an important architectural legacy in his elegant villa, little more than one room deep, but perfection.

There is also the existence of the most imposing neo-Gothic folly in Ireland, the Jealous Wall, intended as a screen to block out the view of Tudenham Park built by the brother who had helped him destroy Mary but became an enemy on building his rival house. Once a great mansion, it is now a sad ruin.

Today's visitors to Belvedere house, gardens and park situated three miles south of Mullingar, soon overlook the sad litany of cruelty, injustice, villainy and revenge that shaped its beginnings. Emphasis has been placed on creating a relaxed child-friendly atmosphere; there are three playgrounds, a courtyard restaurant and a range of wildlife and heritage displays.

A small herd of rescued ponies now live here and are enjoying the company of Billy the goat. The wicked earl disliked domesticity, but this is an ideal place for family outings. The lakeshore with views of crannógs across Lough Ennell and the romantic parkland grounds with their variety of walks, ice house, follies and neo-Gothic octagonal gazebo and arch are sufficiently enticing that some visitors might forget to investigate the house and walled garden.

The original entrance leading to the house is no longer in public use. Instead the approach and car park are dominated by a magnificent ring fort, upon which stand 13 beech trees, a further two having been felled by time.

The stable yard, separated from the house by the famous Jealous Wall, has been converted into an interpretative centre housing various audio presentations featuring the contrasting wildlife of the lake, lake shore and woodland. Bat and owl boxes have been placed in some trees.

The Whooper swans have returned to the lake, adding to the numbers of mute swans already in residence.

Brigid Geoghegan, of the Visitor Services team, played here as a child during the occupancy of the final private owner, Rex Beaumont. She makes no secret of her love of the place and, in the tradition of gifted local historians, has accumulated an impressive grasp of the history, architecture and natural heritage of the Belvedere demesne.

Attention invariably focuses on the house which is as individual an architectural artefact as Charlemont's gracious Italianate miniature, the Roman Doric temple-like Casino at Marino in Dublin. Belvedere, also built as a pleasure house, is not as architecturally ambitious as the Casino but it is equally singular.

She died at 91 in 1828 and passed Belvedere on to her grandson, who rarely visited. A cousin, of whom we shall hear more, became its next master. The list of private owners ends in 1982 when Beaumont, who had been given the house by Charles Kenneth Howard-Bury, leader of the 1921 Everest expedition, sold Belvedere to Westmeath County Council.

Without being either exploited or compromised, it is now run as a heritage property and amenity. The purchase saved the house, but not before an auction in 1980 disposed of the original contents, leaving the county council with the task of sourcing period furnishings. The original furniture is gone but, far more importantly, the wonderful oak floors and fireplaces remain, as does the plasterwork.

Neither a private home nor a museum, this two-bedroom house retains a commanding presence. Each main room has a lake view, while the parkland setting and formal walled gardens draw visitors back.

The tour through the house begins at the servant's entrance, past the dairy and kitchen and up to the bow-ended dining room where once the rich dined well later retiring to the elegant drawing room, also bow ended.

In between, on either side of the small front hall, is the "own" or morning room and a library. Upstairs, both bedrooms are now hired out for conference use. Belvedere is paying its way.

Villain though he was, the wicked earl - at least with regard to Belvedere - was more interested in comfort than ostentatious statement.

Belvedere, never intended as a family home, the lovely staircase being deliberately too narrow to accommodate the wide dresses of the day, is an appealing, unintimidating house, compact enough for a present-day visitor to fantasise about living in it.

The Rococo ceilings and plasterwork designed by the French stuccodore Barthelemij Cramillion and decorated in allegorical themes incorporating classical mythology are magnificent.

Included alongside the classical details is the passion flower motif that has been adopted by the heritage team as a symbol through the property.

Exterior features of the two-storey over basement house include its distinctive curved end bows, Diocletian upstairs windows (which had been replaced in the 19th century but were reinstated during the past five years as part of the extensive restoration programme), Venetian downstairs windows and imposing front terrace.

Charles Brinsley Marlay inherited Belvedere House in 1847 from his cousin Brinsley, the fourth earl of Lanesborough and grandson of Jane, Lady Lanesborough, the wicked earl's only daughter. Described as a kindly landlord, Marlay was an astute art collector and, in time, left his valuable collection to his Cambridge University college.

He created the wonderful Victorian walled garden, which has been carefully restored and is one of Belvedere's special features. He also added the front terrace. His practice of planting exotic trees was continued by the next owner, Charles Kenneth Howard-Bury, a military man and considerable botanist, who took over in 1912.

Even as early as a March morning with most of the spring colour yet to emerge, the walled garden is a beauty. The most modest amateur gardener will envy the recently restored and gorgeous greenhouse, a marvel of dense greenery in clay pots.

Open all year round, Belvedere House attracts for the grace of the house and also for its parkland setting where joggers and walkers are free to roam. Attention to detail has been well matched by a relaxed atmosphere. Admire the house, its plasterwork, its exterior beauty and enjoy its setting, an 18th-century Irish parkland, still alive and thriving.