Zoe Saldana: ‘I loved Star Trek. I didn’t learn until later that it was unorthodox for women to be obsessed with science fiction

She’s become sci-fi's It Girl, casting an interested eye on Spock in Star Trek, motion-capturing the Avatar franchise, and starring as a kick-ass galactic outlaw in Guardians of the Galaxy. It’s a natural progression for someone raised on classic space opera in a house full of women 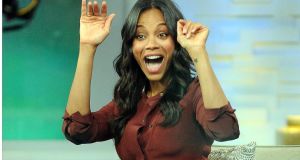 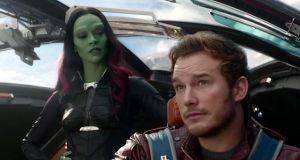 Far out: Zoe Saldana and Chris Pratt in Guardians of the Galaxy 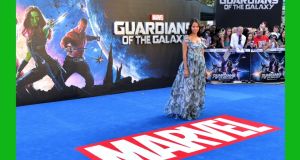 Guardian angel: Zoe Saldana at the UK Premiere of Guardians of the Galaxy on July 24th, 2014Z

‘When I go to someone’s house and the toilet seat is left up I get very offended,” says Zoe Saldana. “It means it’s a house where men live. I get it. But it means there are not enough gentlemen living in that space.”

Oh, Zoe. As if anyone would ever dare do such a thing in your presence. Curled elegantly into an armchair, the star of Star Trek and Guardians of the Galaxy has kicked off her nude, classically fashioned shoes so that they are Just Out Of The Way. If Nancy Mitford had gotten around to describing the correct way to ditch your heels, this would pass with flying colours.

But back to that lack of gentlemen and how to deal with those lavatory-seat offenders.

“It’s all about repetition,” she smiles. “You can’t assume that someone will know better. Sometimes you have to keep saying something until it can’t be forgotten. I’m learning that.”

Happily, the Italian artist Marco Perego, whom Saldana wed in secret last year and is now expecting her first child with, does not seem like the type to sit around scratching himself with his house keys. After the marriage, the couple moved to Hollywood, not far from where Saldana’s two sisters live.

She’s the middle one in a particularly close trinity of siblings.

“We grew up with so much love,” recalls Saldana. “And sometimes when you grow up with a lot of love you don’t know how to filter it when you’re outside the family. You go up to other kids and you kind of freak them out, and they’re like ‘ugh, get off me’. But my sisters and I quickly realised that the way we cared was too much for some people. It was a blood thing.”

Culture Shift
Zoe Yadira Saldaña Nazario was born in New Jersey and was raised in New York until the age of nine, when her dad was killed in a car accident. Saldana and her two sisters were subsequently sent to live with their late father’s family in the Dominican Republic. Their Puerto Rican mother remained in New York to earn enough money to pay for private school for her daughters.

That must have been a massive culture shift, even for someone who was raised speaking Spanish at home.

“Starting over was difficult,” she nods. “A kid’s world is a very cruel world. If you can survive that kind of transplant and you still have a true sense of yourself then you’ve made it. It wasn’t that all kids were mean. But at some point, my sisters and I gave up trying to impress other people outside our union. I think that saved me. We had each other.”

Her walk and, in particular, her bum earned a good deal of unwanted attention, she recalls.

“I don’t know if it’s a Latin thing,” she says. “But I do have a very particular walk. Kids used to make fun of me at school. And even now, when I’ve practised a movement for a role, I can still see the Zoe walk coming through.”

The younger Saldana also found solace in dance. Having enrolled in the ECOS Espacio de Danza Academy, she studied ballet, contemporary and jazz, the perfect training, she says, for her future career as an action hero.

“It gave me discipline and focus and it taught me how to survive disappointment at an early age. You develop a thick skin. You can’t feel sorry for yourself. Well, you can. But after an hour you have to stop feeling sorry for yourself or you’ll be closed to other and better possibilities.”

She laughs: “And ballet is the reason I can kick.”

She remains a student of screen movement: “Patrick Swayze moved so beautifully,” she gushes. “When he did action movies you wanted to see him fight because even when he was hitting people, he moved like a gazelle. There was nothing clunky or violent about it.”

Ballet also led to her first film role in 2000, as the female lead in Nicholas Hytner’s teen hoofer drama, Centre Stage. She worked steadily after, often in high-profile projects, for much of the next decade, appearing alongside Britney Spears and Kim Cattrall in Crossroads (2002), popping up as a swashbuckling pirate in Pirates of the Caribbean: The Curse of the Black Pearl (2003), and starring as a Trekker in Steven Spielberg’s The Terminal (2004).

There was a neat synchronicity when, in 2009, she was cast as Uhura in JJ Abrams’ Star Trek reboot: “Growing up, I loved Star Trek and I loved science fiction. I didn’t learn until later on that it was a bit unorthodox for women to be obsessed with science fiction. But my mom and my sisters and I always had an affinity for it. It was what I loved to read. It was what a loved to watch. More than any other genre.”

Green screen, green skin
Zoe Saldana loves science fiction, and science fiction, in turn, loves Zoe Saldana. “I guess you just gravitate towards what you like. Or what you feel comfortable with. I love all the possibilities of it. And it puts you in contact with film-makers who are capable of imagining the unimaginable.”

Between Trek movies, Saldana played the Na’avi lead in James Cameron’s Avatar. Her performance-capture skills will be required for that film’s three sequels. Right now, though, in a cinema near you, Saldana is Guardian of the Galaxy’s Gamora, the newest, green-skinned superhero in the Marvelverse.

It’s typical – aside from the green colouring – of the kind of roles Saldana pursues. Is there a guiding principle at work?

”When I read something, if I don’t think it’s a realistic representation of what a woman is, then it’s not appealing for me,” says the 35-year-old. “There’s a lot of material out there that features a woman or women. But they’re not that relevant to the movie. They don’t impact on the story. They’re fluff. They’re just there to be serviceable. That’s why so many women end up chasing after the same roles. I know that for Out of the Furnace and Nina Simone [Saldana won the lead role in both films], a lot of actresses read for those”.

When Saldana talks about her family, it sounds like a beehive, replete with grandmother, mother and female-only siblings. There’s a strong sense of maternal influence: growing up, the girls and mother watched 2001: A Space Odyssey and the original Star Trek together. Saldana similarly attributes her fashion sense – thought to be impeccable by folks who know about such things – to her grandmother, who worked as a seamstress in various New York fashion houses during the 1960s.

This kind of matriarchal environment must surely have contributed to her aversion to fluff roles.

“Yes. But it wasn’t just the women. Even after my father passed away, there were men around. There were uncles and cousins. And they were just as pro-women and just as encouraging as the women in my family. I don’t know what it’s like to be in an environment where a woman is expected to submit or serve. Or to be secondary.”

Behind the lens
For the Saldana siblings, interests continue to be shared interests. Saldana and sister Cicely have just signed a deal with Lionsgate to develop and produce Latino-centric media projects, under the banner Saldana Productions.

“I always loved movies but it’s more recent that I think about who the cinematographer is or the importance of knowing about French cinema and Italian cinema and Asian cinema. I’m going to take some time in the fall for movies. Now I have the production company with my sisters, that’s more important than ever. I should know more about my business. But so far I’ve done okay. Maybe I’ll get to a festival in the next few months, and just avoid all the cameras and see everything.”

Do the cameras make a difference for such an apparently steely person? Or has the relatively recent blossoming of her career made a sizable impact in terms of profile and intrusion?

“I feel it and I don’t. I’m very much a skip to work person. And when I’m not working I’m just living my life in such a normal way. I’m not aware of my profile. I really like hearing that the films are doing well or hearing someone say they thought the story was really beautiful. But I don’t know how to measure popularity. I wouldn’t even know where to start.”