Will Poulter: ‘Acting was a release from what I found to be a very tough period of my life’

Even at 21, Will Poulter works hard at being the best thing in every picture he makes, writes Donald Clarke 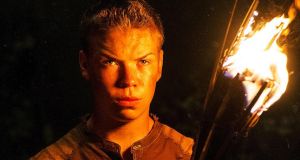 When we say an actor steals a scene we leave the suggestion that some sort of bullying or upstaging has gone on. This is not always the case. In Gerard Barrett’s upcoming Glassland, a sad realist fable set in deprived west Dublin, young Will Poulter, the 21-year-old son of English health professionals, really does draw all eyes towards him.

He does not elbow his way in front of Jack Reynor or Toni Collette. Quite the reverse. He gets by on a class of quiet vulnerability and wide-eyed ingenuousness. You seek out his corner of the screen and offer him sympathy. It’s quite a performance. Even the accent is spot on.

“It’s not just about coaching. It’s about trying to find the accent,” Poulter says. “Gerard wanted all of us to integrate ourselves into the world of the film and into Tallaght, where it is set. We were able to experience the environment before we were thrust on set. That’s so unusual. I have to thank Gerard for taking a chance on an English kid.”

Poulter is sincere, but the truth is that Barrett, the young director of the excellent Pilgrim Hill, was lucky to get him on board. Ever since he emerged as the troubled juvenile in Son of Rambow, Poulter has worked hard at being the best thing in every picture he makes. Who was that great kid in The Chronicles of Narnia: The Voyage of the Dawn Treader and We’re the Millers? It’s Will Poulter, pride of Chiswick.

This week, in what might count as his last juvenile role, he turns up as a tough bruiser in the adaptation of James Dashner’s young-adult epic The Maze Runner. “The transitional period is tough,” he says. “You can find yourself too old to play high school roles, but too young to play the leading man. You have to be quite smart about how you present yourself. Your public image reflects your range.”

Will is less confident in himself than that last quote might suggest. Impeccably well mannered (I am easily old enough to be his dad, after all), he still seems slightly baffled by the position in which he finds himself. He has already shown a daunting range. Poulter is brashly confident and dominant in The Maze Runner – the leader of a gang of displaced youths – but the real Poulter seems closer to the bruised kids he played in Son of Rambow and Glassland. He admits that acting offered escape.

“It’s interesting. School didn’t offer me very much,” he says. “And acting was a release from what I found to be a very tough period. At school I felt quite down and despondent. I felt it had nothing to offer. I wasn’t going to become anything. It felt like a pipe dream. When I got Son of Rambow, which was my first professional role, I started to believe and that spurred my ambition.”

Will was only 14 when he got the role in Son of Rambow – a gorgeous coming-of-age film – but, by his own reckoning, he already seems to have undergone the odd existential crisis. He laughs at the suggestion. But he doesn’t deny he was a serious sort of child. “I think I did have a lot of those feelings at 12,” he says. “I didn’t want to be behind a desk. I didn’t want to do a normal job. I had made my mind up. I became despondent prematurely. I had my mid-life crisis when I was 16. I suppose I’d agree with that. But acting has helped me develop a lot in my private life. Confidence is the greatest gift for an actor.”

Two years later, he appeared as Eustace Scrubb – aggressive young jerk – in the third film of the faltering Narnia series. Will could have kept ploughing that successful furrow, but he decided to take a degree in drama at Bristol University. “I never doubted that this is what I wanted to do,” he says. “I just felt that I might to go to university and get some real life. It wasn’t stimulating in the same way. I loved being at Bristol, but I missed the thrill of being on set.”

His father, a professor of cardiology, and mother, a former nurse, were uneasy about his drift towards acting, but a few lucky performers have a talent that cannot be ignored. Sure enough, over the last few years, Hollywood has come calling. Gossip suggests he will be in the next film by Alejandro González Iñárritu. Part two of The Maze Runner is grinding into production. Last year, he was (here we go again) the best thing in fugitive comedy We’re The Millers.

If he’s not shooting in Louisiana, he’s attending premieres in New York. No doubt he’s already got himself a pad in Venice Beach or one of the Sohos. This rocket is not coming down anytime soon.

“I live in Chiswick with my mum and dad,” he says, “I love it there.” Hang on. He’s still living in the middle-class end of Hounslow with his folks. Why?

“I’m just not in a financial position to move out. I guess I will eventually.”

What a nice, responsible young man.

The Maze Runner is out now on general release