Why Alien 5 is the send-off that Ripley deserves

Alien; Covenant is out, but according to Ridley Scott the Alien 5 sequel is dead. Here's why we need another film about sci-fi's most bad-ass action hero 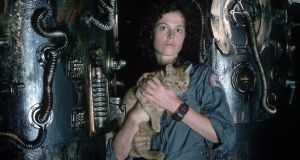 Sigourney Weaver as Ellen Ripley with Jones the cat in Alien. A long-mooted Alien 5, directed by Neill Blomkamp, has been cancelled

As Alien: Covenant arrives in cinemas, there are tidings good and bad for fans of the spacefaring franchise. On the one hand, eager acolytes have been getting a closer look at Ridley Scott’s prequel, ostensibly a character-driven story in which a terraforming crew encounter a harrowing ordeal upon arriving on a supposedly uninhabited planet.

Like Prometheus, Scott’s last entry into the canon, Covenant (the second of three films that will eventually connect directly to Scott’s 1979 film Alien) remains intent on detailing the Alien mythos, but is also a happy return to people being gorily murdered in space corridors.

While dispensing cautious optimism with one hand, however, the director dealt a deathly blow with the other, as he recently confirmed the death of long-mooted sequel Alien 5. Speaking at a press junket, Scott offhandedly dismissed the project’s chances of progression, saying: “[It] was an idea that evolved from, I believe, a 10-page pitch, and I was meant to be the producer on that. And it didn’t evolve. Fox decided that they didn’t want to do it and that was it.”

In production for a few years under District 9 and Elysium director Neill Blomkamp, Alien 5 has had a troubled production history, to say the least. With news of cancellation having dogged the film more than once in the past few years, 2016 saw promising noises emerging from both Blomkamp and Sigourney Weaver, who was set to return to the juggernaut for the first time since 1997. Many fans had also had their hopes raised by some sumptuous concept art shared by its director just months ago.

With another Alien movie out, it’s perhaps surprising that diehard xenophiles are disappointed. For one thing, the mainline Alien series hasn’t exactly been in rude health. Depending on what metric you use, there have been between four and nine Alien movies. 1979’s peerless Alien set Weaver’s character Ellen Ripley and her crew against a single alien attacker, a biomechanical nightmare that stalked them in their rusty old space freighter. Taut, beautiful and horrifying, it remains a high watermark for science fiction and horror.

In 1986, James Cameron’s fantastic, action-packed Aliens was released to nearly equal acclaim as its practically perfect forebear. In Cameron’s take, Ripley accompanies a squad of space marines to a hostile planet, where they meet not one, but loads of aliens.

In 1992 arrived Alien 3, a patchy, dour affair directed by David Fincher. (The nascent auteur was significantly unhappy with his debut movie, which depicted an alien attack on a space prison, and he has since blow-torched it from his back catalogue like so many leathery xenomorph eggs.)

Still with us? Good. Fast-forward to 1997 and we got Jean-Pierre Jeunet’s muddled, incoherent Alien: Resurrection, set 200 years after the events of Alien 3, and featuring Ripley reanimated as a human/alien hybrid. This would be the last film of the original timeline, and the series lay dormant, save for some wacky and largely uncanonical nonsense in the forgettable Alien V Predator series, until 2012. It was then that Ridley Scott returned with ponderous prequel Prometheus, setting the stage for its sequel, Alien Covenant.

So why, despite the diminishing returns of the original series arc, and the largely muddled spin-offs that have come in the past two decades, should any devoted cineaste have been particularly excited about the prospect of Alien 5 in the first place? One simple answer is that the first two films really were, and are, so good that the series’ qualities persist, no matter the films’ subsequent decline.

Another factor is Blomkamp himself, who seemed a great choice: a film-maker with a love for the material and the technical chops to do it justice. In an even more promising turn for fans, Blomkamp’s film was pitched as a successor to the first two, ignoring the third and fourth entirely. As much as it’s exciting to see a film like Covenant – a new episode with entirely new characters, helmed by the series’ originator – the prospect of a fresh take within the same universe seemed an equally thrilling prospect.

Being in the hands of an old master is all well and good, but it might be said that JJ Abrams’s crack at a Star Wars movie engendered more fervent anticipation than another George Lucas effort. At the time, Peter Jackson’s announcement that he would be helming the Hobbit movies was met with delight, but how many fans now wonder what Guillermo del Toro would have done with the material if he’d followed through on his early work on the project?

Perhaps chief among the disappointments in Alien 5’s cancellation is in the loss of an opportunity to reconnect with those things that seem stuck in the original arc, the characters and spaces that made those films so compelling. Of course, many of their traits will be brought, part and parcel, on board Covenant: Scott’s eye for visual storytelling, beautiful cinematography and, of course, the incredible, otherworldly design of the aliens themselves by HR Giger.

For all Prometheus’s flaws, few could argue it was anything other than a stunningly gorgeous film, and while it may have gotten bogged down in exposition, the scope to build on the world it fleshed out is undeniable. Nevertheless, some of Alien’s killer elements can’t make the trip to the spin-offs, not least Sigourney Weaver’s star turn as Ellen Ripley, now uncoupled from a project that might have represented a fitting swansong for the character.

Although Ripley was originally written as a male character named Martin Roby, all parts in Dan O’Bannon’s original script were explicitly labelled as unisex, prompting gender-swapping for many of the lead roles. Strong and stoic, but possessed of a disarming vulnerability, the Ripley that emerged was a meaty and assertive prototype for all female action heroines to come.

Weaver’s iconic take has its descendants throughout the culture, from Sarah Connors to Buffy the Vampire Slayer, herself created by Joss Whedon, lesser known as the screenwriter of Alien: Resurrection. At a time when leading roles for women in action blockbusters are still shamefully rare, Weaver’s effortless grit seems strikingly ahead of its time.

Her Ripley is not strong because she’s fearless, but because she’s often terrified, and willing to fight on regardless: whether clutching a cat in her underpants, or in a mech suit setting fire to a 20ft alien queen. For all the heft of the original film’s pacing, atmosphere and spectacular set and creature design, 40 years later Ripley remains its frantically beating heart.

So with the loss of Alien 5 goes perhaps the final chance to give Ripley and Jones the cat the send-off they never got in the original run. Die-hard fans can cry out for a return for the old canon but, in Hollywood at least, it seems no one can hear their screams.