Where did it all go wrong for Blade Runner 2049?

The hyped sequel has had a disastrous opening: is it all the studio's fault? 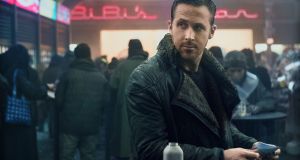 Ryan Gosling in a scene from Blade Runner 2049. The film was expected to take $45 million. It looks as if it will end up with around $31 million. Photograph: Stephen Vaughan/Warner Bros/AP

Looked at from one angle, Blade Runner 2049 was destined to fail. Ridley Scott’s 1982 original opened to modest reviews and underwhelming box office. Why should things be any different three decades later? Just look at all the box-office flops already this year. The medium is frail.

Well, the reviews were ecstatic and the advance tracking – surveys of audience interest – was enormously positive. Speaking to The Irish Times, Denis Villleneuve, the film’s director, tried to remain modest as he argued that, with good notices, the film would surely succeed at the tills. “I am not saying that Rotten Tomatoes is perfect,” he said of the review aggregate site. “But the idea that the power of film critics is coming back is good.” At time of writing, Blade Runner 2049 is at 89 percent on that site. Oil those tills, baby.

The film’s relative failure in the US on its opening weekend is probably the biggest surprise for box office analysts in the last 12 months. (Not many would have bet their shirts on recent failures such as The Mummy or Guy Ritchie’s King Arthur Legend of the Sword.) The film was expected to take between $45 and $50 million. It looks as if it will end up with around $31 million. Given that Blade Runner 2049 cost a massive $150 million, this is very grim news for Alcon Entertainment, Warners and Sony.

The corporate partners were counting on a smash. So was almost everybody else. This is the box office equivalent of Trump’s win or Corbyn’s resurgence. Truly, nobody knows anything.

Maybe the experts will be doubly wrong and, buoyed up by word of mouth, the picture will revive after a poor opening. That never, ever happens these days. But, hey, where there’s life there’s hope. Overseas territories will help Blade Runner 2049 just a little.

The film had a respectable opening elsewhere, but non-Anglophone nations are usually soft on the more cerebral school of science fiction. Though a hit here and in the US, Villeneuve’s Arrival made just 50 per cent of its haul outside North America. In contrast, Fast & Furious 8 took over 80 per cent of its loot in “the rest of the world”.

So, how did everyone get it wrong? The short answer is everyone listened to too many older men on the internet. That demographic turned out in decent numbers for Villeneuve’s film. Variety explains: “Males over 25 represented 50 per cent of the audience and females over 25 were 27 per cent, while males under 25 represented 15 per cent of moviegoers and females under 25 were 8 per cent.”

Hang on. Eight per cent? Cinema audiences are skewed towards the young and if such a tiny proportion of younger woman are interested in your picture then trouble awaits. Let’s call it Bro’ Runner 2049.

The greybeards on Twitter were driving the conversation and, understandably enough, pundits failed to attend those who were remaining quietly uninterested. Blade Runner may have registered with the guys who bought each successive cut on DVD, but the picture has not registered with many of their sons and daughters.

But what about Dunkirk, you say? That film was not based on any familiar franchise. It is set in a forbidding place: the past. It has few proper movies stars in it. Yet it secured a whopping $520 million at the world box office.

Well, imaginary interlocutor, here’s one key distinction. Punters still knew what Dunkirk was about. They may not have read Hugh Sebag-Montefiore’s fine book on the battle, but they know the film concerns an evacuation during the second World War. It’s right there in the trailer.

Before the press screening of Blade Runner 2049, a statement was read out asking critics not to reveal any plot points in their reviews. (I ignored that request and gave my usual rough outline of the story’s opening sections.) The trailer, though slickly made, told viewers almost nothing about events in the film. The greybeards on Twitter celebrated this victory for the increasingly repressive Spoiler Police. Elsewhere, those not already familiar with the original material squinted at reviews that refused to say why Ryan Gosling was prowling about LA or what was making Jared Leto so grumpy. They scratched their heads at trailers that arrogantly assumed the punter had already decided to go and see the film.

In his analysis of the weekend figures for Forbes magazine, Scott Mendelson addressed the issue with characteristic acuity. “Alcon Entertainment was so draconian about plot details, both in the marketing and the reviews, that consumers were merely presented with ‘Hey, it’s a Blade Runner sequel, Harrison Ford is back, Ryan Gosling is here, and it looks gorgeous!’” he wrote. For those already on the Blade Runner train that was probably enough. But you can’t make serious money on a $150 million movie by appealing merely to the fans (add at least $100 million to that budget to get the true figure after marketing).

It would be wrong to suggest that the ludicrous preciousness about revealing story details caused the film to fail in the US. It was merely one of several factors. The film had a restrictive R rating. The only female on the poster is a hologram (not that anyone told the public that). Blade Runner 2049 was so absurdly long that cinemas could only screen it a few times a day. Even the positive reviews conveyed that it wasn’t a mainstream, car-chase popcorn movie.

Still, there is a lesson here about spoiler paranoia. You can’t market a product to an initially uninvolved audience without telling them what that product is. Give it a go. Stand on a street corner with a basket of cans marked “Well-Reviewed Stuff”. Try the patter. “Sorry, I can’t tell you anything about what’s inside madam. That would be a spoiler.” I predict you will, at the end of the day, have no less “Well-Reviewed Stuff” than you had at the beginning.