What British punk band the Damned did next 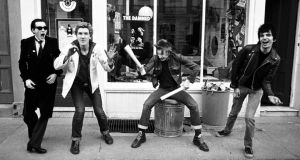 What becomes of the Damned? It could be a dark existential question, but students of the 1970s will think first of the scruffy pioneers who in 1976 probably released the first British punk single. It was called New Rose and its riff has never been bettered. Despite that, the Damned were never as fashionable as the Sex Pistols or the Clash. They didn’t gain the pop kudos of Buzzcocks. What they did manage was longevity.

In the decade after the release of New Rose, the Damned recorded seven albums and accidentally invented goth. Captain Sensible, the bassist and guitarist, had a hit with a cover of Happy Talk and left the band. There were illnesses. Such unlikely bedfellows as Motörhead’s Lemmy and Culture Club came among their number. Now, after 35 years, a version of the group is touring again.

Wes Orshoski, a former journalist who recently made a fine film about Lemmy, was drafted in to record the event for posterity. “Actually, it was in Dublin I made the decision to do this film,” he says. “I was interviewing Sinéad O’Connor for a film I was doing about Burning Spear, the reggae musician. Anyway, I did the Lemmy film and I met the guys from the Damned.”

Wes, who wrote for Billboard magazine for many years, had already had the idea to shoot a film about another act that had been around the block. Then the management of the Damned phoned. “I thought I wasn’t interested in doing a punk rock throwaway thing that was going to end up as a DVD on the merchandise table. I wanted to do it properly. What a great story: here is a band that had achieved so much. They ticked all the boxes. And we’re overlooked. What an honour to be asked. To work in the punk world. A lot of people in the British press think I am this fan boy and I am really not.”

The Damned: Don’t You Wish You Were Dead comes to us first as part of a punk season at the Triskel Christchurch in Cork and turns up a few days later at the Irish Film Institute. It’s a satisfactorily noisy piece of work that is funny throughout. It is, of course, impossible to escape the shadow of This is Spinal Tap and Don’t You Wish You Were Dead offers its fair share of hat tips (both unintentional and deliberate) to the great mockumentary. Orshoski notes that, whereas Tap ploughed through drummers, the Damned had a similar problem with bassists.

“That was very difficult,” Wes says. “I didn’t want to spend 15 minutes talking about the money. So there are some things that are open-ended. I am aware of that. The fact that I inserted Rat saying: ‘It’s by the grace of me and Dave that Sensible gets a royalty at all’ . . . has really hurt my relationship with Sensible. At one point, I said to him the film has to be balanced and he said: ‘No, it doesn’t’.”

Such wounds don’t heal easily in the world of rock. Don’t You Wish You Were Dead is a reverential piece of work. Such luminaries as Chrissie Hynde, Jello Biafra, Mick Jones and Steve Diggle turn up to celebrate the London group. The band members all get to make their cases. It seems, however, as if nothing matters so much to Captain Sensible as his feud with Rat Scabies. At the London premiere of Orshoski’s film, he made a point of disrupting the event in characteristically anarchic style.

“He hadn’t seen the film before and at one point he yelled ‘rubbish’ at the screen,” he says. “He took out a metal tin of candies from his backpack and started tearing up the wrappers and shushing people. This was four years of my life. It meant everything to me. He’s going up and down the aisle handing out candy saying: ‘These are the boring bits. I’ll give you your money back.’”

It sounds a little as if Orshoski, a typically polite mid-westerner, needs a break from the rougher edges of England. As well as slagging from the band, he has had to put up with ranting about the great theological debate in rock: did the Americans or the British invent punk?

“One dolt in Sheffield stood up and said he didn’t believe all these Americans belonged in the film.” He sighs in exasperation. We don’t have have space to tease out that conundrum.

The Damned: Don’t You Wish You Were Dead plays at the Irish Film Institute on July 23rd.

PUNK ON FILM AT TRISKEL The good people at the Triskel Christchurch in Cork have selected four smashing films to illustrate the rise of punk rock in the late 1970s. Julien Temple’s The Filth and The Fury (2000) sees the director of The Great Rock ‘n’ Roll Swindle return to the story of the Sex Pistols. Wolfgang Büld’s Punk in London (1977) offers a fascinating contemporaneous look at the scene from a German perspective.

Büld encounters such groups as the Clash and X-Ray Spex in their pomp. Jack Hazan and David Mingay’s Rude Boy (1980), rarely seen since its release, frames documentary footage of the Clash within a loosely drawn fictional structure. There are vital messages here from a period when music spoke up for an excluded generation.

Punk on Film runs at the Triskel, Christchurch from Sunday July 19th.

Stephenie Meyer on Midnight Sun: ‘This was just a huge, pain-in-the-butt book to write’
10