We meet again Mr Bond: On the set of Spectre with Daniel Craig

Buoyed by the smash success of ‘Skyfall’, the makers of ‘Spectre’ are promising the biggest 007 thrill ride yet. Donald Clarke joins cast and crew on set during the Mexico leg of the Bond shoot

Daniel Craig is back as secret agent 007, as James Bond prepares to return to cinemas in 'Spectre'. Video: Sony Pictures/Reuters 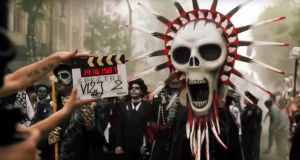 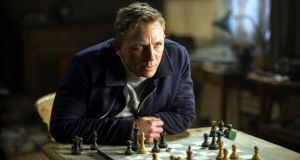 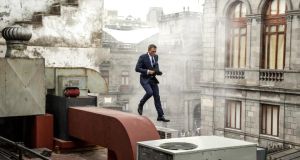 Mexico City’s Zócalo is one of the largest urban squares in the world. A social centre since Aztec times, it fits the Metropolitan Cathedral, the National Palace and Federal buildings around a space large enough to land a B-52 (maybe).

What international entity could be powerful enough to shut down this space for several days? The city authorities may have said no to the UN or Nato. But they weren’t going to turn away the latest James Bond film.

It is late March, and your correspondent is among a few hundred people (cast, crew, journalists, publicists) at the Gran Hotel Ciudad de Mexico on the west side of the square. Shooting for the opening sequence of Sam Mendes’s Spectre, the 24th Bond film, is unfolding hundreds of feet beneath us.

The scene takes place during the Day of the Dead, so 1,500 extras have been costumed and made up to play revellers at that Halloween jamboree.

They barely make an impression. Two huddles form colourful animated blobs, around which many thousands more will later be sketched in by the computer Johnnies.

“The Day of the Dead has a great visual language,” Barbara Broccoli, now producing her eighth Bond film, tells me. “It has turned out to be really exciting. When you have many hundreds of people, it’s always a challenge.”

Royale roll of the dice

Broccoli, daughter of series co-creator Cubby, is back on a roll. She reinvigorated Bond with Casino Royale in 2006. The baffling Quantum of Solace was a major stumble, but Mendes’s Skyfall, the last outing, took more than $1 billion on its way to becoming the biggest film ever at the UK box office.

Spectre, which brings Daniel Craig back as Bond opposite Léa Seydoux, Christoph Waltz, Ralph Fiennes and Monica Bellucci, is being mounted on a staggering scale. The Day of the Dead sequence is said to be the biggest Bond sequence ever.

“We came to this making a very successful film and we had to make a better one,” Craig says. “I haven’t done every Bond movie, so I don’t know. But I have done quite a few big movies, and it is certainly the biggest scene I have ever done. Coming to work and seeing that – over 1,000 extras – is so extraordinary.”

You have to feel for Daniel Craig. As the release of Spectre looms, he has got himself in trouble by first suggesting that he would be around for at least one more picture, then later telling Time Out (apparently addressing his plans for the next week, rather than the next year) that he’d rather “slit his wrists” than do another Bond film.

Back in March, those questions were already being asked. What a strange business. Craig is doing well in the job, but everyone’s speculating about his successor. It’s a bit like being David Cameron. Will it be George Osborne next? What about Boris Johnson? The chatter must drive him crazy.

“It will be Boris Johnson,” Craig laughs. “I can announce that right now. Look, I don’t go on the internet. I don’t listen to gossip. And I don’t really care. This is my job. I finish in July. This is all I am thinking about.”

Is he contracted to do any more?

“All I am thinking about is finishing this movie,” Craig repeats. “I love doing it. I have had more fun on this film than all other films put together. We’ll see. There is no contract, no. It is up to me.”

The caution surrounding plot details is similar to that which generated so much huffing and puffing on Star Wars Island earlier this year. We do know that Bellucci plays the widow of an assassin eliminated by Bond. Waltz is a senior operator within the sinister organisation – last seen in Diamonds Are Forever – that goes by the name of Spectre. I have (with my eyes only) seen a helicopter taking off from the Zócalo in Mexico City. So we know that happens.

Craig seems to have had more input into the script than any previous 007. The word is that he was tweaking the story with the writers for many months.

“I have been working on it for two years with the director and the scriptwriters,” he says. “That has been my working life on and off for two years, and for six months it has been all I have been thinking about.”

What ideas? Spoil it for us.

“I can’t list them. I have many, many ideas. Some of them are shit. Luckily, I have good people around me.”

The more Craig talks, the more apt the comparison to a politician seems. Every answer is tempered by caution as to script secrecy and plans for the future.

The outrageous success of Skyfall will have cheered the team, but it also contributed to the pressure they are now under. After the lumbering catastrophe that was Quantum of Solace, they merely had to avoid shooting off their own feet. Now, they have to follow up the biggest film (by far) in the franchise. Did they expect Skyfall to do what it did?

“Yes and no,” Craig says. “We couldn’t even imagine that would happen. It was off the charts. So that does put us under pressure. But it’s fantastic pressure. By having Sam back, we created a language that has one foot in the past, but also hopefully modern.”

And how has Bond changed for Spectre?

“I’ve got a bit of a limp in this one. I was thinking of a stutter,” he laughs.

Quite right. It was wrong of us to ask.

Broccoli and Michael G Wilson, her half-brother and co-producer, have had to cope with a few pocket controversies during the production and pre-production periods. Consider last year’s hack of Sony Pictures. Memories have faded of that infamous data infringement, but, as we meet in Mexico, there is still much chatter about an apparent leak of the Spectre script.

Wilson and Broccoli, always eye-wateringly businesslike, neither blink nor flinch at any question. Did they have to change much?

“Look, we’ve been working on the script for almost three years,” Broccoli says. “Whatever came out wasn’t anything. That was the production draft.”

With more than 30 years of experience on Bond (she was an assistant director on Octopussy), Broccoli has developed a skin of reinforced Teflon. It doesn’t seem as if anything can rattle her. Let’s give it a go all the same. What about Quantum of Solace? There was a general feeling that, after Casino Royale reignited enthusiasm, the confusing, muddled, indifferently received follow-up constituted a betrayal of trust.

“This is the 24th movie,” Broccoli says in a voice dripping with calculated reasonableness. “There are some films that people like more than other. The last four films sit well together.”

“We were very pleased with the movie. But we accept that the public make the decision at the end.”

We don’t really need Broccoli to answer the question. Skyfall demonstrated that lessons were learned. Mendes appeared to have been given full control and he produced a much more cohesive and assertive piece of work. Grey clouds have pulled in over a surprisingly temperate Mexico City, but the current production still seems buoyed by the confidence such success engenders.

That’s not going to stop us asking one more question about the succession. Broccoli somehow manages to avoid looking angry or exhausted when she is asked if she’s thought about a replacement.

“No! No! We don’t want to replace Daniel Craig. As I always say, it’s like asking a women when she’s getting married who the next husband is going to be.”