Triple 9 review: bursting at the seams with criminal intent

Director John Hillcoat is a master of macho posture, and with the help of Kate Winslet, he lays it on thick in this indecently thrilling, star-studded heist movie 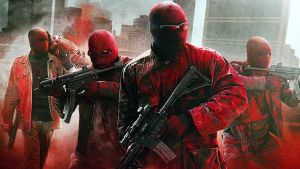 What are we to make of John Hillcoat? Well, the Australian is certainly at home to masculinity. The images he created in films such as The Proposition, The Road and Lawless suggested the traces a sweaty fist leaves when wiped across a brow after a bar fight.

The pastiest milquetoast emerges ready to scale oil rigs and wrestle crocodiles. No negative criticism is intended. Hillcoat is a heck of a film-maker. Few directors since John Millius have painted so elegantly with raw testosterone. Men are bad. But their badness is guiltily compelling.

This terrific heist thriller does not find Hillcoat connecting with his inner Anne of Green Gables. Beer cans clatter down the film’s rickety stairwells while pit bulls gnaw at its pipes. There is very definitely a woman in it, but she is more ruthless, immoral and terrifying than any of the male thugs.

Kate Winslet is having several whales of a time as a Russo-Jewish gangster named (what else?) Irina Vlaslov. Hair lacquered into a tsunami- shaped helmet, her vowels rougher than bathtub vodka, she presses the film into a corner and slaps it cruelly into whimpering submission.

If there is a critic brave enough to call the performance a tad overcooked, I’d like to meet her or him. I think she’s doing just grand. Can I move on now?

Triple 9 hangs around a crew of bank robbers headed by the conflicted Michael Belmont (Chiwetel Ejiofor). Matt Cook’s script does at least allow Michael an excuse for a slide from amorality to immorality: he longs to protect the child he had by Irina’s sister. The rest are just bad, bad people.

The action begins with a bank robbery in Atlanta that, without attempting to conceal its debt to Michael Mann’s Heat, manages to find new ways of playing the old, throbbing melodies. A car chase takes on a surreal quality when a cash bag bursts to spray red dye throughout the overpass.

Later, the crew find themselves blackmailed into stealing just one more thing for Irina’s mob. The problem is that the item – a box of computer discs – is housed in a super-secure facility manned by paramilitaries.

The gang comes up with a scheme: if they kill a cop elsewhere in the city then, as the police are required to respond in force, they will buy themselves extra time at the heist. The team fingers Chris Allen (Casey Affleck) as the necessary sacrifice.

Cinematographer Nicolas Karakatsanis, who did such good work on The Drop and Bullhead, shoots Atlanta as a fuggy confusion of mismatching architecture and unattractive thoroughfares.

Triple 9 is similarly unsympathetic to its characters. Belmont is the closest thing to a decent man among the crew, but even he accepts the grim plan with relatively little protest.

There is, in Hillcoat’s cinema, a sort of brash relish at masculine misbehaviour. One gets no sense that the film approves of the ruthless lunge for swag, but it does ask us to enjoy being unnerved by it all.

The film certainly savours its depiction of the Russo-Jewish mafia (or the “Kosher Nostra” as it is gleefully dubbed). I will leave it to Jewish and Russian readers to decide if the representation is offensive, but Hillcoat and his team cannot be faulted in their lust for exotic new forms of malevolence.

Triple 9 does not have quite enough plot to sustain its length and flags a little in the middle act. Too many subsidiary characters – Woody Harrelson’s good-old-boy cop for one – fail to map out space of their own.

No such quibbles can, however, squeeze the bad-tempered fun from this armpit of rough entertainment. Yo, Hillcoat. You’re my man.

Ivan Yates turns the blowtorch on all politicians
5