The Surprise review: the best euthanasia rom-com of the year 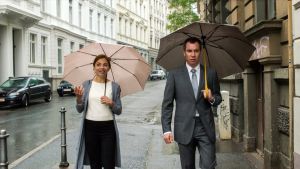 Death becomes them: Georgina Verbaan and Jeroen van Koningsbrugge in The Surprise

When his beloved elderly mother dies, Jacob (Jeroen van Koningsbrugge) inherits a vast family fortune. Freed from filial obligations, he sets about dismantling his estate, so that he might give the money away and enact a long-gestating desire to kill himself.

Before you can say “but, but, but…” Jacob enlists the services of Elysium, an illegal death-assistance service who arrange for their clients to meet with ‘accidents’. There, Jacob encounters winsome fellow Elysium customer Anne (Georgina Verbaan),

There’s a snag. For are illegal assisted-suicide service, Elysium are awfully pernickety about the rules. Once you’ve enlisted their services, there’s no going back.

Can the blossoming romance between Anne and Jacob withstand repeated assassination attempts?

Bizarrely, this is only Mike van Diem’s second film since 1997, when he received an Academy Award for his debut feature, Character. His steadfastly whimsical direction ensures that The Surprise is the lightest possible hue of black comedy. At heart – and it’s a big heart at that – this a straight-up romantic-comedy. Its dark materials are merely impediments to a conventional central love story, replete with last-minute dash.

Maybe it’s just as well that The Surprise – which was initially developed as a possible vehicle for Scarlett Johansson – has ended up as a Dutch-Irish-German-Belgian co-production. Composer Brian Byrne’s score twinkles accordingly and DOP Rogier Stoffers (Death at a Funeral, The Vow) finds a warmth in sometimes steely grey European skies.