Review: Just one of many reasons to avoid this weird, thrown-together thriller 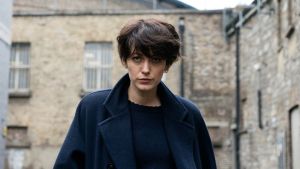 Blake Lively in The Rhythm Section

It’s unfair to damn an entire film for its unconvincing representation of heroin addiction or for music supervision that values thudding explicitness over original thinking. As it happens, there are many other reasons to avoid this weirdly thrown-together thriller: plausibility, coherence, too many orchestrated highland jigs. Even dogs expect more discipline from their proverbially disordered dinners.

We will, nonetheless, begin by scoffing at the notion of Blake Lively as a drugged-up sex worker. It’s not just the fact that Ms Lively – wearing one of many bad wigs – looks little more whacked than she might after a vigorous half-hour of whole-wheat Pilates. The film also fails to explain how she got here.

Based on a novel by Mark Burnell, The Rhythm Section nods aggressively towards the Lockerbie disaster in its set-up. It seems that Stephanie Patrick was a “top student” at Oxford when her parents were killed in plane crash. A lot of story has gone missing in the jump from quadrangle to flophouse, but, hey, if the rest of the film clicks we may find ourselves not caring.

No such luck. Let us touch upon that music choice before stripping any more flesh from the film’s tired, cranky bones. When Steph goes to buy more gear, we actually hear the actual Waiting for My Man by the actual Velvet Underground. They don’t play Sit Down when she sits down. They don’t play Help! when she needs assistance. But they do play It’s Now or Never when, towards the close, time is much against her. Make more of an effort.

Anyway, after a bit more unconvincing slumming, Stephanie learns that a notorious terrorist may have blown-up the aeroplane. Teaming up with Jude Law’s shady operative, she sets out to reinvent herself as a killing machine and extract bloody revenge.

Filmed partly in Ireland, the Rhythm Section has had class-A talent thrown in its direction. Reed Morano, who did such good work on The Handmaid’s Tale, takes the director’s chair. Sean Bobbit, acclaimed for 12 Years a Slave, is the cinematographer. Barbara Broccoli, legendary Bond producer, signs the cheques and shoulders executive responsibility.

Somewhere along the line, a potentially promising idea has curdled into off-key pandemonium. There are superficial pleasures to be derived from the scuttling travelogue – Dublin plays London, Spain looks to be playing Spain, north Africa also gets a nod – and individual action sequences have their own tolerable rhythms.

But the rampant miscasting and half-baked storytelling get in the way throughout. What exactly is this thing?