The Rewrite review: Hugh Grant’s fringe may be gone, but the comic timing is still there 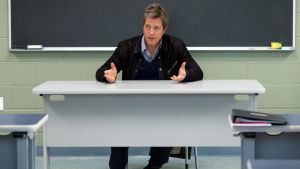 High Grand in The Rewrite: A little older, greyer and funnier than before

They may as well have taped a sign saying “kick me” on this film’s back. Hugh Grant stars as a Hollywood professional (a writer, not an actor) who just can’t seem to get the public’s attention any longer. After much argument with his agent, he eventually takes a teaching post in New York State. The appalling reviews virtually write themselves -- which, perhaps, explains why the distributors, eager to avoid such auto-evisceration, decided not to press screen the picture.

What do you know? The Rewrite turns out to be Grant’s most amusing comedy in over a decade. Many of the traditional rom-com conventions are in place – the protagonist’s mid-film transformation is hugely implausible – but Hugh’s timing is immaculate, the supporting cast is all top-notch and the collegiate atmosphere is effectively maintained.

At times, The Rewrite plays a little (just a little, mind) like an adaptation of a campus novel by David Lodge or Malcolm Bradbury. Unable to follow up on one Oscar-winning hit, Grant finds himself teaching screenwriting at a mid-level public university in a modestly sized eastern city. Within days of arrival, he has slept with one of his students and, while attending a wine-and-cheese do, outraged a Jane Austen specialist (Allison Janney) with a stream of casual misogyny. “Too much wine, not enough cheese,” he later says.

The protagonist really believes in guff like “character development” and “three-act structure” (and “protagonists”, for that matter). Sure enough, initial cynicism soon turns into humility and altruism. Showing his age around the eyes a bit, Grant confirms his enviable gift for comic self-effacement. The fringe is gone. But the weary shrug is more effective than ever. Admirable support from JK Simmons (as the bullet-headed, soft-hearted dean) and Marisa Tomei (as a slightly underwritten love interest) keep the comedy bubbling in the Hughless corners.

Well worth a glance.

Catching the Worm: Examining the motivation behind scientific research
10