Review: The director embraces all his worst instincts in this horrible film 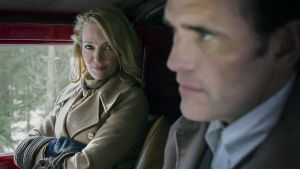 Uma Thurman and Matt Dillon: an attack on misogyny or a celebration of it? With Von Trier, you never get a chance to find out

A hint of guilt has always attended the appreciation of Lars von Trier’s work. It’s not just that you feel yourself absorbing unlovely attitudes to gender and human relations. There is also the suspicion that you’re being had. Respond (in any way) to the bold provocations and you are, perhaps, playing along with his wicked, childish game.

That balancing act has, for most von Trier veterans, proved hard to maintain with his latest horrible film. The director looks to have abandoned earlier aesthetic compromises – the grim beauty of the otherwise icky Antichrist, for instance – and embraced all his worst instincts.

The House that Jack Built concerns a maniac murdering largely stupid women in northwestern bits of the awful, decadent USA (von Trier guesses, never having been there). Of course it does. What else would it be doing?

For some, the defining moment will be the scene in which Jack – played with numbing monotony by Matt Dillon – severs Riley Keough’s breast and pins it to a car. (Sorry if that’s a spoiler, but you are better off knowing these things before seeing it.) For others it will be the apparent celebration of Albert Speer. The awkward allusions to current “men’s rights” babies is at least as unsettling. “If you’re unfortunate to be born male you’re born guilty,” Jack says before running off to graphically murder another woman.

Let’s approach this in a charitable mood. I mean, this guy is a nut and a loser. So we’re looking at an attack on misogyny rather than a celebration of that vice. Right?

It’s a workable argument, but the relish with which von Trier makes Uma Thurman into a prattling snoot and Riley Keough into an empty twit spins the head. There is a delight in sadism for sadism’s sake that gets in the way of the film’s exhaustingly exercised ambitions to analyse the meaning of art. The Gothic arch comes in early. So does footage of Glenn Gould.

Eventually, this study of the Greats gets round to Lars von Trier himself. Over clips from earlier Lars joints, Jack explains it’s a mistake to suggest that artists express their worst desires through outrages in their work. We get that, Lars.

Nobody is saying you actually want to kill women or (this happens too) cut the legs off ducklings. But this level of mediated interest seems unhealthy.

At this stage, even the most forgiving will cast eyes to heaven, but he has one final flourish in hand. After two hours of navel-gazing (not to say navel-gouging), the film descends amusingly and thoughtfully into a version of Dante’s hell. It’s the best thing he’s done since Melancholia. It’s not worth the wait.