Review: These 90 minutes are among the longest you’ll endure in the cinema this year

Restricted trailer for The Happytime Murders, for mature audiences only. 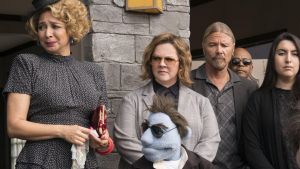 “Show us on the puppet where this film touched you.” “It touched me here and here and [sobs] here – on my special place.” “Let the record show that the witness is pointing towards his soul. HIS SOUL!”

If you find that joke inappropriate (and you probably should) then I wouldn’t recommend going anywhere near this indescribably horrible atrocity from the family that brought you the Muppets.

Don’t get me wrong. There’s nothing inherently wrong with subverting and perverting mechanisms familiar from children’s entertainment. There are few scenes funnier than the endless puppet sex romp from Team America: World Police, but, unlike the jaw-dropping perversions here, that sequence had a clear and well-achieved purpose. It was a pastiche of the sheet-clutching, sax-blasting couplings in your average Jerry Bruckheimer film.

No such purpose is apparent during the scene in The Happytime Murders that finds the protagonist ejaculating rope after rope of silly string. It goes on forever. It will certainly provoke a reaction in audiences. That might be enough.

But, as the punters turn to one another and point disbelievingly at the screen, their brains will be mostly taken up with hope for escape. That and concerns about the film-makers’ sanity.

Don’t worry unduly. The Happytime Murders barely makes it to 90 minutes. Those are, however, some of the longest minutes you’ll endure in the cinema this year. The jokes aren’t funny. The puppets are often ugly. The weedy soundtrack sounds like the result of a fat man sitting on a Game Boy in 1992.

What’s it about? Hang on. I’ll get to that in a minute. I’ve got a bit more to get off my chest first.

Certain to figure at the perennially unimaginative Razzie Awards, The Happytime Murders does, however, look very much as if its inviting the opprobrium that’s already come its way.

Here’s the rub. Yes, the film is ugly, disgusting and inappropriate, but, when set beside its lack of originality, those criticisms seem almost like arguments for the defence. It takes some imagination (not much, but some) to conceive of puppets gaining sexual satisfaction from watching an alien cow being vigorously and damply milked. It takes none to construct your story so shamelessly around that of Who Framed Roger Rabbit.

That’s what it’s about. Gesturing towards a metaphor for institutional racism so threadbare that it borders on the offensive, Brian Henson, son of the late Jim, imagines a Los Angeles where puppets have been designated as an underclass. They slave away as underappreciated sex workers. They treat sugar as a recreational drug.

None of those indignities are, however, so degrading as those endured by Melissa McCarthy as she seeks to keep her talented head above the rising tide of effluent. Always game, always charming even in garbage like this, Melissa plays a cop who, some years back, had a falling out with a hard-boiled puppet PI, voiced by Bill Barretta. The plot has something to with the killing of former cast members from a once-popular TV show. Nobody will much care to hear the solution.

The picture appears to have reached its sordid nadir when we encounter a despairing Gonzo-like thing dying miserably in a drug den. That, however, seems positively merry when set beside the images of puppet children, their many eyes apparently the result of incest, existing in awful isolation somewhere by a desert road.

At such points, one might reasonably conclude that everyone is reading The Happytime Murders wrong. It is, perhaps, a purposefully transgressive film that means to lurk forever in the psyche like a chronic brain disease.

“Where on the soul did he touch you?”

“Here, in its darkest, darkest recesses.”