The Guardians: The year’s most handsome film has arrived 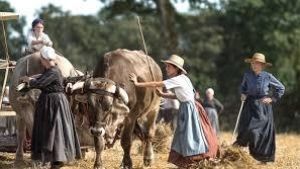 Not to be confused with the Russian bear-man superhero movie of the same name. The year’s most handsome film has arrived.

Under the bucolic gaze of cinematographer Caroline Champetier (Holy Motors), there’s not a single frame of this French first World War drama that might not hang in a gallery collection titled “After Monet”. Farmhands are windswept and sun-drenched in fields. Churchgoers in mourning are dappled. Even the obligatory opening shot of dead young men is artfully arranged.

The Guardians, however, is not their story. Working from a 1924 novel by Ernest Pérochon, Xavier Beauvois (Of Gods and Men) and editor-and co-writer Marie-Julie Maille have crafted a historical chronicle of the women left behind in rural France. Thus, Hortense (Nathalie Baye) is a stoical matriarch who bosses a household and farm in the Limousin region of France alongside her daughter, Solange (Laura Smet, Baye’s real-life daughter, a casting choice that adds a certain family frisson).

Hortense’s two sons, Constant (Nicolas Giraud) and Georges (Cyril Descours), and her son-in-law, Clovis (Olivier Rabourdin), are at the front, leaving the family shorthanded. They hire Francine (newcomer Iris Bry in an exceptional performance), a bright, helpful woman who was raised in a nearby orphanage.

Over the five years between 1915 and 1920, the farm is quietly, unobtrusively modernised, but there other more engaging developments. When Georges comes back on leave, there’s an immediate spark with Francine. The pair begin a correspondence, even though class difference and Maman look certain to get in the way.

This central romance adds dramatic weight to a story of shifting power dynamics that is often too subtle for its own good. A lengthy run time adds to the stately sense of pacing. As heritage pictures go, it’s immaculate and tasteful. One almost wishes for a few more calluses from the scythes. Oh, what a lovely war, indeed.

Still, the final soapy scene, replete with a nod to Paths of Glory, is simply irresistible.