The Food Guide to Love

The Food Guide to Love - trailer 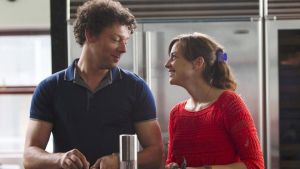 Apparently, cinema is broken this week. And so we’re stuck with the weakest batch of new releases since, well, around this time four years ago. All are nominally aimed at women – or some prehistoric conception of same. Funny that.

Exhibit A is The Food Guide to Love, a Spanish-Irish co-production that moves through familiar romcom beats with little, if any, distinction. Food fight? Check. Meet cute moment? Check. Naked man gets locked out of apartment? Check.

The characterisation is even more predictable. Celebrity food writer and practised cad Oliver (Richard Coyle from Grabbers) has yet to get pass the six-month mark with any romantic relationship. Enter Bibiana (Leonor Watling), a gorgeous, earnest Spanish girl.

The Food Guide to Love was filmed here as an afterthought. Despite some local phrasing-grafts by playwright Eugene O’Brien (coddle gets high billing), the film is about as Irish as paella. Picking up where such Celtic Tiger pictures as Goldfish Memory and The Trouble with Sex left off, Food Guide looks spectacularly anachronistic. Its sense of Cool Dublinia is not simply out of step in the current climate, its borderline offensive.

Real-world complications wouldn’t matter so much if the script was fit for purpose. But every (very) small deviation from the form sounds a bum note. The genre timing is off: Oliver’s BF (reliable Simon Delaney) doesn’t appear for sounding-board duties until well into the second act. The dialogue is yellow pack. Comic sidekicks, including David Wilmot’s environmental activist, don’t get nearly enough screen time. A subplot concerning Oliver’s parents is so tacked on you can see the Pritstick smears.

Coyle and Watling twinkle with enough luminosity to transcend their meagre roles. But mostly the film reminds us why Hollywood has given up on romcoms.

To work on TV, Normal People had to differ from the book
7

The King of Warsaw: A cinematic and thoughtful thriller
8