The Colour Out of Space: Take that, you art-horror whippersnappers 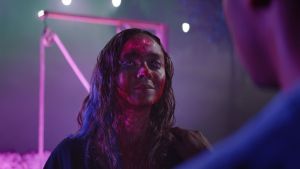 Madeleine Arthur in the Colour Out of Space

Film Title: Color Out of Space

The gist of Lovecraft’s text remains. After a meteorite lands in the front yard of their alpaca farm, Nathan Gardner (Nicolas Cage, uncaged and slam dunking tomatoes into the bin) and his family and livestock, are physically and mentally transformed by a mutant extraterrestrial purple cloud.

His wife Theresa (Joely Richardson) is the first to snap with a carrot-related injury. Teenage daughter Lavinia (Madeleine Arthur) attempts to fend off the ill effects of the cosmic intrusion with Wiccan rituals. Her brother Benny (The OA’s Brendan Meyer) and local weirdo Ezra (Tommy Chong) are already spaced out, so their auditory and visual hallucinations are, at first, attributed to too much weed.

The youngest Garner Sam can hear something in the well. Elliot Knight’s dashing young hydrologist is on hand to warn everyone about the water. But by then, Cage has already started using his unhinged outdoors voice.

Criminally, this is the first feature film Richard Stanley has directed since his notorious dismissal from The Island of Dr Moreau in 1996. In keeping with early 1990s breakthrough films such as Hardware and Dust Devil, Color Out of Space relishes its B-movie status.

The film, which was co-written with Scarlett Amaris, is both a clever discourse with Lovecraft and a careful calibration to appeal to all the quadrants of genre fandom. There are soapy hooks: “Look at the way you’re dressed; think of the signals you’re giving,” Theresa snaps at Lavinia.

There are silly adolescent jokes, including a cat named G-Spot. The dialogue ranges from the banal (“You don’t get a lot of milk from alpaca”) to the meme-friendly (“When the cat’s away, the mice will play,” bellows Cage).

In an era when so many horror and science-fiction pictures lean on jump scares, Stanley meticulously builds a series of increasingly sinister tableaux, using quiet or uninhabited spaces, until boom, here come monstrous forms and the apocalypse.

Take that, you art-horror whippersnappers.