The Bookshop: Emily Mortimer and Bill Nighy hold this uneven film together

Review: Period detail is a little off in this Spanish-German co-production shot in Co Down 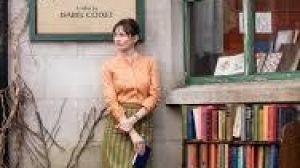 This really is another England. The costumes seem wrong. The bookshop itself is contemporary-corporate faux-hipster. Even the cake looks entirely too modern.

On Chesil Beach reminded us of how miserable life in England in the 1960s could be; Isabel Coixet’s new film goes one better and stops off in small-town 1959.

Florence Green (Emily Mortimer), a free-spirited widow arrives in a whispering community on the Suffolk coast having purchased a long-abandoned house with the intention of turning it into a bookshop.

Florence is soon summoned to a ghastly party thrown by local snob Violet Gamart (Patricia Clarkson). The hostess’s face freezes in horror when she learns that Florence has already moved in to the property. “The fact is many of us are not at all convinced by the sudden transformation of the old house into a shop,” cautions a smiling, poisonous Violet, “Many of us believe it should be a kind of local arts centre.”

Move over, Stockard Channing in Grease. Take a hike, Nancy Allen in Carrie. There’s a new movie HBIC (head bitch in charge) in town, and she wants an arts centre now, goddammit. What follows is a sustained campaign against Florence’s unexpectedly bustling business, a nasty crusade that enlists everyone from local odd-jobbers to parliamentarians.

Against this, Florence finds unlikely allies in Christine ( Honor Kneafsley), a straight-talking teenager, and Mr Brundish ( Bill Nighy), a reclusive bibliophile living alone in a gated gothic mansion.  Everybody else – literally everybody in the film – is an absolute rotter. The stench of everyday misogyny rises from condescending lawyers and bankers. Even the local layabout toff (James Lance) questions Florence’s dress sense and business acumen. “Are you sure you’ve received the proper advice?” he wonders.

“Once you read a story, you inhabit it; the covers of the book are like a roof and four walls,” says Julie Christie’s narrator. Sadly, we don’t quite get to inhabit this story. Coixet’s screenplay, adapted from Penelope Fitzgerald’s 1978 Booker nominee, is at its best when venomous barbs are delivered with polite handshakes and formal greetings.

But this Spanish-German co-production, shot mostly in Co Down, is a little off in terms of period details. This really is another England. The costumes seem wrong. The bookshop itself is contemporary-corporate faux-hipster. Even the cake looks entirely too modern.

It takes a while for the halting screenplay to coalesce into drama. There’s too much reliance on Christie’s voiceover. Letters are read to camera. Motivations and actions are thoroughly explained.

The script may stutter but the cast - especially Mortimer and Nighy -  hold this uneven project together. And Clarkson is but one of a legion of baddies to enjoy loathing.