The Addams Family: It’s time for a Charlize Theron intervention

Review: Theron is as miscast as Morticia as Chloë Grace Moretz is as Wednesday 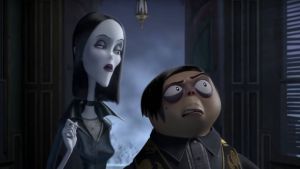 It’s time for a Charlize Theron intervention. The woman has an Oscar and a Silver Bear; she’s not supposed to be battling against Helen Mirren for a career worst performance in Fast & Furious 8 or slumming it in manbaby stoner comedies like Long Shot.

Even the unintentionally hilarious trailer for Bombshell contains far more family comedy than this latest dusting down of the titular ghouls.

Theron, who is almost as exquisitely miscast as Morticia as Chloë Grace Moretz is as (now perky) Wednesday, has little to work with in a script that never convinces as a movie. There are a few decent set-up jokes. (“I want to live somewhere disgusting, somewhere corrupt, somewhere no one in their right mind would be caught dead in.” Cue Welcome to New Jersey sign.)

There are some pointless pop-culture references. The lime in the coconut? Oh please. Try not roll your eyes too hard when Morticia uses spiders to form a bridge across a bottomless pit: “We call this surfing the web,” she says.

There is a subplot concerning Pugsley’s unreadiness for his Mazurka, a kind of bar mitzvah for monsters, for which all the extended Addams clan will assemble. There’s another arc concerning a Martha Stewart-alike home improvement blogger and real estate developer (Allison Janney) who spies on her neighbours in a picture-perfect town called – clang – Assimilation.

She doesn’t like the Addams mansion spoiling her view, nor Wednesday’s chumminess with her daughter (Elsie Fisher).

The film forgets to do anything meaningful or particularly amusing with Nick Kroll’s Uncle Fester or Bette Midler’s Grandmama. The designs are faithful to Charles Addams’s original 1930s comics but that aesthetic is completely at odds with shiny, 3D, CG animation.

Don’t expect any of the wit or charm of the 1960s TV show or Barry Sonnenfeld’s big-screen adaptations. Monstrous. But not in kooky, spooky way.