Ask the actor to pile on the pounds, then lose them? No bother. Need a cracking interview in jig time? Here you go. But beneath the bonhomie is an unmistakable intensity

This week, Donald reviews Yorgos Lanthimos's dark satire The Lobster and Tara takes on Guillermo del Toro's gothic thriller Crimson Peak. Plus, Donald talks to Colin Farrell about his latest role, comic timing and packing on pounds for The Lobster. 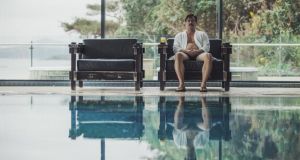 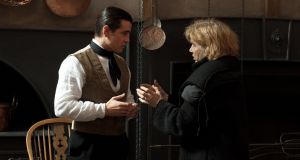 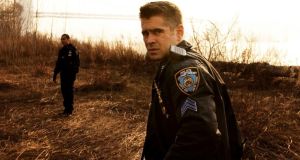 Oh, Jesus! Do I have to interview Colin Farrell? That’s always like pulling bleeding teeth.

“Howya! Ah, everything’s great, thank God!” he bawls. “Me mam’s over in Los Angeles. She got married to an American fellah. Got married in my back yard. But no one’s got me yet. I’m still getting away with it.”

Pulling teeth? That was just my little joke. I’ve been talking to Farrell for well over a decade, and he always greets me – others, too, I’m sure – as if we’ve just wound up at the end of the same bar on a Friday evening. Not that he touches the sauce any more. After a few run-ins with substance abuse 10 years ago, Farrell is fitter and fresher than he has ever been. Look at that warm, healthy skin. To paraphrase Flann O’Brien, you could play handball off them abs.

This is all the more impressive when you ponder his slightly rounded frame in The Lobster, Yorgos Lanthimos’s brilliant, surreal satire. It must be nice when your employer demands that you eat yourself porky. Or maybe not.

“I preferred getting the weight off to putting it on,” Farrell says. “Because as soon as you start taking it off you know you’re heading towards health. When you’re putting it on you feel like shite. Your breathing is getting harder. Eight weeks on. Eight weeks off. So it was a short space of time. I had to shoot a Dolce & Gabbana commercial. So I had to get it off.”

In The Lobster Farrell plays one of several unfortunates who, when staying at remote hotel, must find a romantic partner within 45 days or be transformed into the animal of their choice. If you’ve seen Lanthimos’s Dogtooth or Alps you’ll know to expect such weirdness. But the new film, entirely shot and largely financed in Ireland, is more engaging and funny than either of its predecessors. There’s something of Fr Dougal about Farrell’s character.

“I never thought of that,” he says. “But I’ve watched so much Father Ted it wouldn’t surprise me if Dougal is in there. The thing about my character and Dougal is that there’s an absolute innocence about them. Most men are children in men’s bodies. They look down and think, Oh, hair. But at least they think they’re men. He hasn’t even got that far.”

The film may be absurd, but it has caustic things to say about human relationships. Farrell nods. “I had that watching Closer,” he says, thinking of his first encounter with Patrick Marber’s script for his vicious drama. “I remember thinking, Oh my God, that’s me! No, wait. This one – this one is me. Oh God! I’m every one of these f***ing characters at different times. It sets up these very dramatic situations, then plays them in a very undramatic way: the normalcy of what is completely abnormal.”

Can Farrell really be closing in on 40? Ah, here. It is, after all, 17 years since he popped over the parapet in Ballykissangel. Clearly a man of iron will, he has, after some not entirely unchoppy waters, fought himself back into a professionally and personally healthy place. No one may have “got” him yet. He is, nonetheless, a proud father to two sons, James and Henry, from different partners. He has worked with Terrence Malick, Steven Spielberg and Michael Mann. Two years ago he shot a version of August Strindberg’s Miss Julie in Fermanagh for the renowned actor and director Liv Ullmann.

“Ah she’s lovely. She’s intense. But she’s very sweet,” he says. “I know this sounds mad, but there are times when you nearly end up being closer to the character than you are to yourself. When Henry came to visit when I was doing Miss Julie, that was so f***ing bad. I would have to act more with him than I would for the film. I had this well of ill things inside me for that shoot, and I’d have to pretend they weren’t there when he was around.”

There is an intensity to Farrell. Don’t underestimate it. He’s a great laugh, but you sense that he’s the kind of man who doesn’t do things by half. If he needs to lose weight in eight weeks then that weight had better look out.

You certainly got a sense of that simmering focus in the second season of True Detective. The HBO series was not particularly well received, but, happily, few critics had a bad word to say about Farrell’s turn as the “troubled” detective Ray Velcoro. Yeah, yeah. I don’t care who knows it. I think the show was misunderstood and (speaking as somebody who loved John from Cincinnati, HBO’s notorious replacement for The Sopranos) even preferred it to the first season. “You’re in a minority,” Farrell says with a wry smile.

The hooded intensity comes back as he ponders shooting in his current home city of Los Angeles.

“As much as I love being at home, and being near family and friends, I would admit that when you’re away it’s much easier to focus on the work,” he says. “It was a pleasure to work in Los Angeles, but I was nervous about it. I did think, How the f*** am I going to go home after this? I know people do that all the time. And it’s fine. You go to work. You go home. But, knowing how dark the material was, I was worried. I figured out a way of losing it on the drive home. And then I’d get to the door and the dad cap goes on. And then it was okay.”

Farrell is preparing for one of the most successful films of 2016. How can we tell? Fantastic Beasts and Where to Find Them is the first spin-off from the Harry Potter franchise. Based on a class of encyclopaedia that JK Rowling wrote for Comic Relief, the picture is shrouded in the usual secrecy that attends such potential behemoths. The Hollywood Reporter has, however, let us know that Farrell will be playing a wizard named Graves.

He has a confession.

“I never read the books.”

So he’s not making it for the kids?

“No. I tried that,” he says, hooting. “I made [the animated feature] Epic. And they hated it. ‘Dad? Can we put something else on?’ That’ll learn me.”

So can he tell us anything about Fantastic Beasts? “I’ll be on that until January,” he says. “It’s a big, big thing. They’ve built the most extraordinary set: a block and a half of New York in the 1920s. It’s gorgeous. Trams and everything. Magic.

“When they shot the Harry Potters they had a whole network of hangars in Leavesden, about an hour outside London. You walk on to set and you feel like a very small spoke on a very big wheel. The Lobster cost as much as the catering budget.”

I’m sure they still had a nice time on the set of the Lanthimos film. Much of it was shot in and around the Parknasilla hotel in Sneem, Co Kerry. There’s posh.

“I feel bad for them,” he says, laughing. “It’s going to be one of those hotels that probably end up doing less business after they made a film there. They’ll be sitting there thinking, We were doing great until that f***ing Lobster film.”

Hats off, Colin. Can I interview you again next week? Or tomorrow. Totally. Name the time and place.

The Lobster is on limited release

When, last May, Yorgos Lanthimos’s brilliantly absurd The Lobster won the Jury Prize at Cannes, observers noted that it was the greatest success for an Irish film there since Ken Loach’s The Wind That Shakes the Barley took the Palme d’Or, in 2006. It now looks as if (fingers crossed) we’re about to see Irish film showered with award nominations.

Lenny Abrahamson’s film of the Emma Donoghue novel Room – produced, as was The Lobster, by the Dublin-based Element Pictures – won the People’s Choice Award at Toronto International Film Festival, a sure indicator of Oscar glory. John Crowley’s Brooklyn, based on the Colm Tóibín novel, received raves at Sundance earlier in the year. Paddy Breathnach’s Viva, shot in Cuba, was equally well received at Telluride Film Festival.

Don’t take our word. Variety magazine has predicted that Room and Brooklyn will get best-picture Oscar nominations and that Viva will be nominated for best foreign-language film. Saoirse Ronan is a likely best-actress nominee for Brooklyn. Michael Fassbender, smashing in Steve Jobs, is currently favourite for best actor. A nation expects.