Terminator: Dark Fate – Arnie’s back, but he should have stayed away 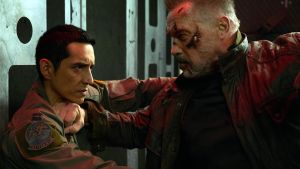 The verdict is in! Terminator: Dark Fate is the best Terminator sequel since Terminator 2: Judgement Day! Sadly, that’s such a low bar an Olympian limbo dancer couldn’t make their way under it. Lest we forget: there are time-lapse rotting fruit videos that offer more thrills than the miscast, misspelled Terminator: Genisys.

Interestingly, there has been rather less shade thrown at this new gender-swapped Terminator than say, the gender-swapped Ghostbusters. But why? From the get-go, this new film is all about diversity: Linda Hamilton’s Sarah Connor gets to say “I’ll be back”; there’s a new politicised trans-human lady Terminator, plus a Latina hero and her Latino Terminator nemesis.

Not “Hollyweird liberal” enough for your tastes? Avert your eyes spoiler police. How about an ICE centre breakout? How about an old-school Terminator recast as a nappy-changing hausfrau?

The sixth film in the sequence glosses over past franchise atrocities by pitching itself as a sequel to Judgement Day. What’s that? You spent good money going to see Rise of the Machines? Well, that’s no longer canonical. No refunds, suckers. Skynet never happened. The Sarah Connor Chronicles? You have wasted hours of your life, comrade, because none of those things happened either.

Don’t you remember Terminator 2: Judgement Day? When Sarah Connor (Linda Hamilton) and the repurposed T-800 (Arnold Schwarzenegger) cancelled the annihilation of humanity? That was really real, as is a new alternate timeline in which another AI menace has taken over and the fate of humanity now rests with a Mexican car factory worker named Dani. Enter lady cyber-soldier Grace (Mackenzie Davis) from the future to save Dani’s ass from a New Improved Terminator (Gabriel Luna). Enter hard-bitten Hamilton (welcome back!) to save both their asses. Enter Arnie to save everyone.

Working from a story and screenplay written by enough people to pull up a circus tent, Deadpool director Tim Miller’s reimagining has plenty of commendable progressive ideas and well-choreographed fight scenes. As a retro popcorn entertainment it passes by at a clip. As a nostalgic haze it improves greatly with Arnie’s arrival. It helps that the gazillion screenwriters have actually supplied him with some deadpan zingers – or anti-zingers – earlier attempts at banter between Davis and a wasted Hamilton are underwritten at best.

It’s fine for two hours. But all the diversity window dressing can’t hide Dark Fate’s inconsequentiality. It has no real point or purpose beyond triggering a Proustian feeling for the first two films in the franchise.