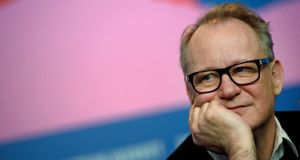 “My career has no beautiful turning point. It’s not like in A Star Is Born. It’s more like the Brooklyn Bridge. You put it together brick by brick”

Stellan Skarsgård tells me that his first ambition was to be a diplomat. “I would like to have been somebody who travelled the world, solving conflicts,” he says.

As things worked out, he became one of Sweden’s busiest actors. In the early 1970s, Skarsgård developed his domestic career appearing in austere plays and serious films. A few decades later, after a wider breakthrough in Good Will Hunting , he began to corner roles as curious, sometimes sinister, eccentrics in English-language productions. He’s been in the Pirates of the Caribbean films. He’s now doing characteristic oddball work with Marvel. Yet he has not sidestepped the diplomatic life entirely.

Skarsgård’s most fruitful collaboration has been with the Danish tearaway Lars Von Trier. He has appeared in six of the director’s films and, as fights have broken out between Lars and the press, has found himself trying to rebuild more than a few bridges. Following that infamous 2011 press conference at Cannes – when Von Trier’s oblique references to Hitler triggered his expulsion – the film-maker has imposed a vow of silence upon himself. So, it was left to Skarsgård to speak with the press at the Berlin premiere of Von Trier’s already notorious Nymphomaniac , an epic drama of sex and existential despair.

Von Trier was there in a T-shirt bearing the legend “persona non grata” (a reference to the Cannes’ authorities’ statement). Shia La Boeuf was, for his own reasons, wearing a paper bag on his head. So, despite a reputation for agreeable eccentricity, poor old Skarsgård was forced to provide the voice of reason.

“I don’t quite see my role as that,” he laughs. “Lars has to answer for himself. It would be different if the media reported on what he is trying to say than just reporting the wording. He was so badly hurt and he’s still hurt. That’s why he was wearing the T-shirt. He is still hurting and he is let down from Cannes. He felt very disturbed about it all.”

Let’s ponder that Cannes incident. At the press conference for Melancholia , Skarsgård looked distinctly uncomfortable as Von Trier explained that “he understood Hitler”. Kirsten Dunst actually tried to stop Von Trier, but on he rambled. Skarsgård must have known that this was going to cause trouble.

“I felt this might not turn out well,” he says dryly. “He was lost. He panicked in the middle of this story. I recognise that. You are tired. You are repeating yourself to reporters. ‘Did I just say that?’ You lose it.”

So did he warn his old friend that a storm was sure to hit?

“I think he knew,” he says. “I looked him in the face and smiled and said: ‘Well, good luck.’ We knew it was coming. It was ugly. He is not anti-Semitic. He has done less for spreading anti-Semitism than [Benjamin] Netanyahu.”

After all that, promoting Nymphomaniac must seem like something of a doddle. Released in two parts, the film stars Charlotte Gainsbourg as a woman who, after being found bruised and bloodied by Skarsgård’s monkish intellectual, relates the grim story of her near-lifelong sex addiction. The film is very explicit, but there is, thank goodness, no ambiguous engagement with Nazism to be found. What was the pitch?

Yes, his films now do have the sprawling quality of classic fiction.

“I think Lars is a storyteller in that same sense. He is a Hans Christian Anderson for adults. Relax. Uncle Lars is going to tell you a story.”

Now 62, the father of eight children, Skarsgård has been at this acting lark since the early 1970s. His father, a businessman from Gothenburg, always wanted to be on the stage. So, there was much support when, after failing to launch the diplomatic career, the younger Skarsgård found himself drifting towards the footlights. It began as a hobby, but he soon discovered that he could make money doing his odd thing on stage and before the camera.

Looking in from the outside, it seems like a peculiar sort of career. He was in his mid-40s by the time he made any impact outside Sweden. It’s as if there are two distinct acts in the Skarsgård epic. Did he ever dreamt that an international career would come his way?

“I had no ambitions whatsoever,” he says. “Well, maybe as a young actor, I was not without career ambitions. I wanted to do what I was doing at that moment. I was a bit pretentious. I was very arty. I couldn’t do anything commercial. Of course, being me, I did end up doing some disastrous things that hurt me.”

Having had to raise eight children, he must have found it hard to turn down any work. Nowadays, one imagines he is comfortably rewarded for pictures such as Thor . It can’t always have been so easy.

“Yeah yeah, you have to bend over now and then, but you try and make it as pleasurable as possible. You know what I mean?”

Then there is the issue of accommodating family life to his busy working schedule. Where does he find the time?

“I usually bring them on set and I bring my wives,” he says.

He brings his “wives”? He is currently on his second marriage. After divorcing his first wife in 2007, he married Megan Everett in 2009 and they now have two young children.

“Yes, sorry. Only one wife at a time – though they are very good friends. We also bring friends over. When I was shooting in Italy, we rented a house and we had 43 Swedes in one place. I’d come home after working for 15 hours and there was always a party going on. I’d have a drink for five minutes and then go to bed. This way everybody is happy and you don’t feel guilty.”

The experience of being on film shoots seems to have won his kids over. Four of them – Alexander and Gustaf being the most famous – are now in the business.

“I never gave them any advice on that,” he says. “I taught them as young children to like themselves and to be on time. I never interfered. I don’t want all that shit. I am really happy they are so good. Gustaf is living in Dublin while shooting The Vikings . I go there and visit him often. You know I met my wife in the Horseshoe Bar in the Shelbourne? That was a very good start to my relationship with Ireland.”

An enormously likeable man with a valuable off-centre charisma, Skarsgård is now one of our era’s key character actors. He’s the first man you call when your screenwriter kicks up an odd, possibly foreign, middle-aged man. His appearance in Von Trier’s Breaking the Waves in 1996 seemed to push him above ground and, presumably, scored him that role in the following year’s Good Will Hunting .

“Well, Breaking the Waves was still an arthouse film,” he says. “My career has no beautiful turning point. It’s not like in A Star Is Born . It’s more like the Brooklyn Bridge. You put it together brick by brick. The loveliest review I had was for a film called A Somewhat Gentle Man . It said: ‘Stellan Skarsgård has a constantly forgettable face.’ Well, if they don’t know who I am that means I can get many different roles.”

Von Trier has been a constant in Skarsgård’s career since he appeared in the director’s spooky TV series The Kingdom 20 years ago. Skarsgård also turned up in Breaking the Waves, Dancer in the Dark, Dogville, Melancholia and Nymphomaniac . He is, thus, well-placed to explain how that director has changed over the years. Was he always so odd? Has he mellowed or become more neurotic? This, famously, is a man who has never got on an aeroplane.

“He has matured,” Skarsgård says. “He’s socially more comfortable dealing with people. The first time I met him he said: ‘I cannot take physical contact with people.’ So I immediately hugged him. Ha ha! It was like holding a fish I had just caught. He is now very good with actors. He’s learning that he’s not afraid of people. But he recently did turn afraid of the press.”

What most confuses people about Von Trier is the extent to which his work is an act of provocation. He must, surely, greatly enjoy the controversy surrounding the films. The question is whether he sets out to trigger that controversy. Some people think him a genius. Others argue that he is an almighty fraud. Skarsgård should be able to offer some clues to the truth.

“He does enjoy the controversy,” he admits. “It’s not the main drive for him to create films, but he doesn’t mind people talking about them and he doesn’t mind making films that cover uncharted territory. He wants to be in the avant garde. It also helps get finance if people talk about it. It’s very hard to get anybody to write anything about independent film.”

One question has been left intriguingly unanswered throughout our conversation. Skarsgård tells us that Von Trier promised to show us the actor’s penis at the end of Nymphomania . We know that body doubles were used. So is that the actual Skarsgård member? I wouldn’t have asked, but he did, erm, bring it up?

“I’m telling all the journalists that we have stand-ins for all our sexual parts and I am saying that it is Lars’s dick.”

So I am to be clear in reporting that it is only “allegedly” Von Trier’s member?