Star Wars: The Last Jedi. Arriving in your galaxy December 15. 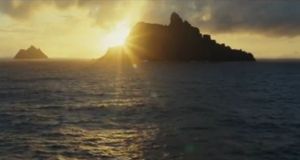 A screengrab of the trailer for 'Star Wars: The Last Jedi'. 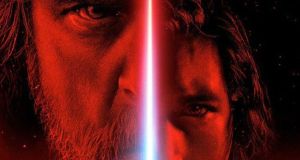 Star Wars: The Last Jedi will be released in December

Well, it looks as if the people at Star Wars got their money’s worth from Skellig Michael. The island off the coast of Kerry (not yet renamed Star Wars Island) is all over the first teaser trailer for Rian Johnson’s Star Wars: The Last Jedi.

The promo was premiered at the Stars Wars Celebration convention in Orlando and released almost immediately online. Within minutes, it had accumulated half a million views on YouTube and overrun all social media platforms. It will be analysed furiously before the film’s release at Christmas.

We begin with Daisy Ridley, back as intergalactic heroine Rey, slapping her hand on what we take to be a little bit of the UNESCO world heritage site. A voice then asks us to “Breathe… just breath”.

No better advice could be put the way of the legions currently hyperventilating before terminals throughout the world.

Then there is some stuff in a space ship and a shot of what might be Darth Vader’s crushed facemask. Is that the back of Princess Leia’s head? The late Carrie Fisher, who plays that iconic character, makes her last appearance in the new film.

There is a bit more waffle about “balance” followed by an undeniably beautiful shot of figures staring enigmatically towards Atlantic vistas.

This is my favorite shot in the trailer for #TheLastJedi pic.twitter.com/pvSVtv5FWw

Most attention will be paid to gnomic utterances by Luke Skywalker (Mark Hamill). “I only know one truth,” he tells us. “It is time for the Jedi to end.”

Modern cinema marketing is obsessed with concealment of “spoilers” until the last moment. So, we should not be surprised that Skywalker’s dialogue does little more than confirm what the three words in the subtitle already told us. This is rather as if a trailer for Gone with the Wind dared to have Scarlet O’Hara declare that: “It is no longer here. I believe some sort of gust took it away.”

The task is to provide just enough hints of excitement and beauty to come.

The Star Wars Island shots certainly deliver the latter. The copious intergalactic battles promise much of the former.

The previous film in the cycle, The Force Awakens, took over $2 billion on its way to becoming the third highest grossing film of all time. The next episode will be expected to come close to that mighty total.

In Ireland, much coverage has focused on supposed damage to Skellig Michael during the filming. As recently as this week, a year and a half after shooting ended, experts were required to confirm that a rock fall was not connected to the making of the Star Wars movie.

Parts of the new film were shot in other Irish locations such as Malin Head in Donegal and Ceann Sibeal in Kerry. Whole new tourism industries have been kicked up as a result.

A glance at Twitter confirms that the hysteria is largely undimmed. One user commented: “star wars invented cinematography”. This is not quite true.