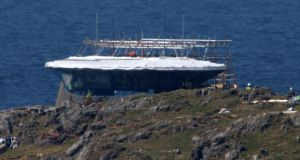 The structure on Malin Head which will be part of the next instalment of ‘Star Wars’ . Photograph: Niall Carson/PA

Close-up images of a set for the next Star Wars movie looks set to spark debate among devotees of the science-fiction saga.

A huge structure was built over the last few days on Ireland’s most northerly point – the dramatic and windswept Malin Head – with locals quick to predict it is a replica of Star Wars hero Han Solo’s vessel Millennium Falcon.

The shoot is secret, however, with locals and landowners sworn to keep it that way, and access to the beauty spot has been closed for the next three days as the arrival of Hollywood actors is awaited.

The space-age construction – at least 15m across and 3m high – is balanced precariously on cliffs a mile from Bamba’s Crown, a headland known for producing dramatic photographs of the Northern Lights.

John Joe McGettigan, from Carrigart, Co Donegal, turned up to the set in full Star Wars stormtrooper regalia, introducing himself with his rank in the Emerald Garrison of EG 1826.

“It’s absolutely fantastic . . . to have Star Wars in Donegal, it’s not a galaxy far, far away at all,” he said.

“Everybody has their own way of going mad, this is ours.”

Not even his devotion to the films could get him closer than a mile to the supposed set of Han Solo’s spaceship: “The shoot is top secret and I’d say the only way of getting into the set is on the Millennium Falcon itself,” he said.

The spaceship construction was also shielded by nets, with rescue boats deployed offshore as work intensified in the hours before filming.

Filming begins today and the Irish Aviation Authority (IAA) has issued a no-fly zone over Malin Head during the course of filming. The restriction was put in place yesterday, and lasts until Monday. An official notice on the IAA website says that this includes the use of drones.

Allie Farren, a local campaigner for the tourist centre at Malin Head, said the spin-offs will be huge for the remote area. “It will help put Malin Head once again on the map,” he said.

“This will be bigger than the likes of Game of Thrones like we’ve seen in the North attracting loads of tourists. Hopefully this will really benefit the area.

“Everybody in this location is tied into the secrecy. It’s been a great talking point. Star Wars is one of the biggest movies of all time and for them to be in Malin Head it’s top class.”

Hugh Farren, owner of Farren’s pub in Malin Head, where film crews are being fed and watered, said: “We have got quite a lot of people coming in who have not been here for years, people coming that have never been here before and they are just coming to see and take in the beautiful scenery we have here and loving the area.”

The production will shoot in Malin before returning to close to where scenes for Star Wars: the Force Awakens was shot on Skellig Michael’s monastic hermitage off Co Kerry. Jedi Temple sets have been constructed on a mountain headland, Ceann Sibeal in Kerry, with the filming expected to take place later this month.

Donegal County Council is overseeing road closures on the Malin Head loop from 8am each day until 9pm on Sunday. – (PA)

Antonia Campbell-Hughes: ‘I like hard graft. That’s what I believe in’
10