Tara Brady speaks to director Richie Smyth and actor Jamie Dornan about their upcoming historical drama 'The Siege of Jadotville'. 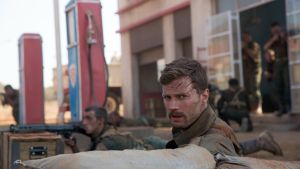 Strength of will: Jamie Dornan as Comdt Pat Quinlan in The Siege of Jadotville

Film Title: The Siege of Jadotville

Few will sit through Richie Smyth’s stirring action film without thinking of Zulu. The 1961 siege at Jadotville in The Congo, during which an Irish battalion resisted repeated attacks from Katangese secessionists, bears comparison with that heroic defence of Rorke’s Drift. The contexts are, however, very different. Adapted from a book by Declan Power, Kevin Brodpin’s script works hard at explaining how a UN force ended up entangled in one of the era’s messier post-colonial disputes.

Viewers over a certain age will be amused to find Mark Strong – most often seen looking glamorous with a gun – turning up as an incarnation of Conor Cruise O’Brien. Then special representative to the Secretary General of the UN, the young diplomat is seen shifting and shuffling towards a messy holding position that leaves the boys from “A Company” surrounded at a small mining town.

The Siege of Jadotville (deliberately or not) sets up O’Brien as a complement to Comdt Pat Quinlan. While the UN man protects his back, the leader of the company, played by a suave Jamie Dornan, begins planning for an assault. His leadership and strategic nous helped avoid a single Irish death. We are left in no doubt as to who the hero of the piece is.

The surrounding stories are addressed with efficiency and professionalism. accent to create a character of modest depth.

We see him connecting warmly to his wife before embarking on a potentially dreadful adventure. His strength of will is confirmed when he stands up to a French officer in a local bar. The complex diplomatic negotiations come across lucidly and, in economic asides, the script connects with local discontents.

The core of the film is, however, very much the assault itself and Smyth, an experienced video director, demonstrates real flair for the martial genre. Order is imposed on chaos as Quinlan devises disciplined strategic responses to escalating mayhem from the ground and the air.

Made for Netflix, The Siege of Jadotville has a breadth that justifies its limited release in Irish and British cinemas. Sadly, the film disappoints in the shallowness of characterisation among the lower ranks. The writers and directors are, of course, hampered by the relative recentness of the events – many members of the company are still alive – but, Quinlan aside, nobody else within the compound gets more than a sketched personality.

This remains a highly diverting film that rightly honours forgotten – and subsequently mistreated – heroes from Irish history. See it in the cinema rather than on your lap.