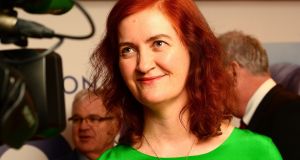 Emma Donohoe, who is nominated for a Golden Globe for best screenplay for Room, photographed at The Lighthouse cinema in Dublin on Thursday night. Photograph: Cyril Byrne / The Irish Times

Brooklyn’s only nomination is for best actress, but Ronan, who has been working the chat shows amusingly, has every chance of winning that prize.

Still, Brie Larson, searing as a woman imprisoned with her young son in Room, remains the favourite. Room also secured nominations in the races for best drama film and – honouring Emma Donoghue’s adaptation of her own novel – best screenplay.

“Oh yeah, I’m so looking forward to the Golden Globes on Sunday,” Ms Donoghue remarked. “I’m so excited that Room is up for a Best Picture nomination because I think that’s a sign that Lenny Abrahamson is really in the big leagues now.”

The success of those two films, both produced in collaboration with the Irish Film Board, has slightly overshadowed continuing acclaim for Michael Fassbender in Danny Boyle’s Steve Jobs.

The Kerryman is nominated for best actor at the Globes, but will struggle to beat Leonardo DiCaprio, shortlisted for his turn as a vengeful frontiersman in Alejandro G Iñárritu’s harrowing The Revenant. In the television section, Caitriona Balfe, a popular Dublin-born actor, is nominated as best drama actress for the fantasy series Outlander.

The Golden Globes are a strange business. Decided by around 90 members of the Hollywood Foreign Press Association, a mysterious body comprising often-obscure visiting journalists, the ceremony gained traction when it was the only other televised awards ceremony.

Suggestions that the Globes were “pointers” to the Oscars were somewhat exaggerated. In the opening decade of this century – despite the Globes awarding both a best drama film and a best comedy/musical film – the top prize in the two events rarely tallied. The Bafta awards, whose nominations were announced on Friday, are a better judge of the Oscars. Brooklyn ran away with six nominations from the British Academy (many of whose members also vote in the Oscars), whereas Room managed a slightly disappointing two.

In recent years, the Globes have pulled themselves together. There have been fewer controversies concerning dubious nominations (near-inevitable when a dozen or so votes can secure a place) and the ceremony itself has become ever more entertaining.

The closest thing to a scandal this year was the decision to allow Ridley Scott’s The Martian, a film rarely confused with Blazing Saddles, to receive a nomination in the best comedy or musical category.

Whereas the Oscars stretch across gaping hours of the evening and take in endless po-faced homilies, the zippier Globes allow guests a drink and invite the hosts to take unsettling digs at the nominees. Ricky Gervais started that process when he grabbed the podium in 2010. Tina Fey and Any Poehler were equally good over the last three years. Gervais returns tonight for the first time since 2012. “If I didn’t drink, I wouldn’t be brave enough to say some of the things I’m going to say,” he told Ellen DeGeneres last week.

This year’s awards season has yet to deliver an obvious frontrunner for best film. The consensus “place-holder” at present is Tom McCarthy’s impressive Spotlight. Telling the story of the Boston Globe’s investigations into clerical sexual abuse, the ensemble piece fits into the tradition of crusading newspaper dramas such as All The President’s Men. It’s the sort of film nobody could dislike. That film is a reasonably comfortable favourite in the best film drama category. Spotlight will probably beat Room to best screenplay.

The Martian, starring Matt Damon as a stranded astronaut, will vie with Adam McKay’s The Big Short, a lively satire on the financial crash, for comedy or musical film. (We’re assuming it’s the quips rather than the disco music that qualifies Scott’s film for this category.)

Awards junkies will be keeping an eye on the best supporting actor section. Sylvester Stallone looks to be a slight favourite for his role as Rocky Balboa in the unexpectedly well received Creed. A win would be hugely welcomed and would give Sly an opportunity to generate a few tears at the podium.

Ms Ronan and Ms Larson will be aware that acceptance speeches at the Globes – still easily the most watched film awards after the Oscars – are seen as an audition for the gongs that really matter. Got your jokes right? Mentioned your dead dog? Produced a good anecdote about Robert Downey Jr? You’re halfway to a nude gold man with a conveniently placed sword. We will know more on Thursday when the Oscar nominations finally emerge. This is just the end of the beginning.