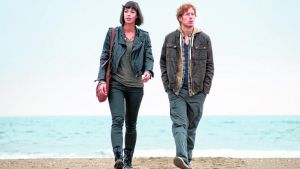 When Ian (Robert de Hoog) finds the body of a hanged teenage girl in the woods, he retreats into his bedroom and becomes obsessed with mortality. Deadened, distant, and decidedly festering, there’s something autistic about Ian’s interest in patterns – leaves, snowflakes, the heat death of the universe – and in his remove from society.

We don’t hear him speak for most of the first act. And when he finally does, his words – “I need you” – produce a chilling sensation.

He trawls the internet in search of ghoulish new material. But just as he stalks death, it, in turn, stalks him. A series of discombobulating fatalities cast Ian in the unlikely role of suicide assistant, a voluntary position that brings the intriguing Naomi (Polly McIntosh) into his life.

Will she provide a much-needed catalyst in this increasingly creepy trajectory?

Transposing Japanese author Kei Ôishi’s novel Loving the Dead to Europe is an audacious undertaking: even the slickest and costliest Hollywood J-horror transplants have managed to throw up vaguely comical wraiths, a trope not lost of the makers of the Scary Movie franchise.

But from this new film’s opening sequence – with its geometric animations and Bart Westerlaken’s angular electronic score – Love Eternal works on its own dark terms. We often wonder if Pollyanna McIntosh is the only entity on screen with a pulse. Robert de Hoog maintains a muffled, enigmatic remove.

The film’s many icky incidents are complimented by a pervading sense of not-quite-rightness. Even when the light of day is at its coldest, Tom Comerford’s cinematography carries an unpleasant snap. The rise and fall of the sound design messes with your brain.

It’s not like anything else, least of all, Muldowney’s fearsome, post-Taxi Driver debut, Savage. Save for the same lurking malevolence. Watch out.

TV Guide: 29 of the best shows to watch this week
2