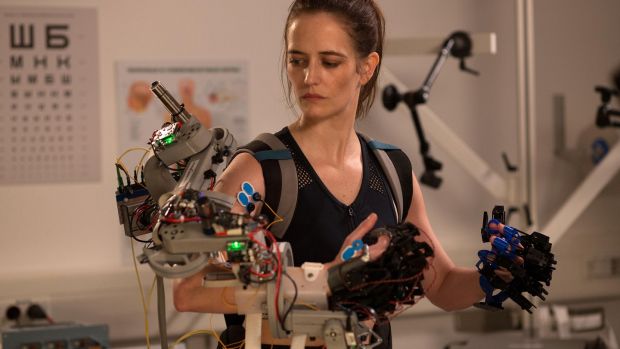 Eva Green as Sarah, an astronaut for the European Space Agency, in Proxima.

It’s tempting to characterise writer-director Alice Winocour’s third feature as a feminine Ad Astra. In common with that existential adventure, it can be difficult to determine where the allegory ends and the space exploration begins.

Proxima is unlike any space movie we’ve seen before, although the film’s detailed preparations for extraterrestrial travel share some DNA with First Man and The Right Stuff. Eva Green puts in a career best performance as Sarah, an astronaut for the European Space Agency who gets an opportunity to spend a year on the International Space Station. It’s a dream come true but also a maternal nightmare. A single mom, Sarah will have to leave her young daughter behind with her estranged, if supportive, astrophysicist ex-husband.

As the launch date approaches, Sarah feels increasingly torn. Her psychological state is further tested by months of gruelling training at the Star City facility outside Moscow and the Baikonur Cosmodrome in Kazakhstan. Between her attempts to withstand g-forces, running 15km everyday, wearing weighted spacewalking gear underwater, Sarah gets to know her fellow astronauts, including the soulful Russian Anton (Loveless’s Aleksey Fateev) and a brash American commander, a character given unexpected depth by Winocour’s subtle writing and Matt Dillon’s performance.

Green’s otherworldliness, so often a touchstone for Tim Burton’s quirky Gothic, is used to amplify Sarah’s drive. Scrubbed of make-up, both literally and figuratively, her facial movements are carefully calibrated to convey multiple meanings.The exceptional location work at the Cosmodrome and Star City, as well as the European Space Agency facilities in Cologne, make for a wonderfully tactile learning experience.

Working with director of photography George Lechaptois, Winocour delights in these hitherto unseen places, crafting a spectacle that doubles as a corrective to a very Nasa-centric genre. A closing shot of wild Kazakh horses set to Ryuichi Sakamoto’s score telegraphs the film’s ambition. Mission accomplished.