Oscars organisers want awards to focus on films, not #MeToo 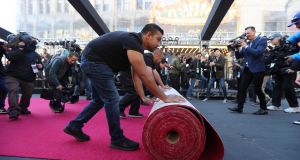 The red carpet is rolled out in preparation for the Oscars in Hollywood, Los Angeles, California. Photograph: Reuters/Lucy Nicholson

The Golden Globe Awards became a de facto rally for the Time’s Up movement, with actresses wearing black to protest sexual harassment and Oprah Winfrey delivering a scorching speech.

The Screen Actors Guild Awards, which had a female-only lineup of presenters, focused on gender inequality and other social ills.

At the Baftas, given by the British Academy of Film and Television Arts, domestic violence activists, inspired by the Time’s Up campaign, swarmed the red carpet.

But in this #MeToo era, the people behind the Oscar telecast have a message: Our show will be focused on films, not the cultural moment around them.

“We want to make it as entertaining as possible — reverential and respectful but also fun and emotional,” according to Jennifer Todd, one of the lead producers of the Academy Awards, which will be hosted for the second year in a row by Jimmy Kimmel. “The Oscars should be a spectacle — fun and funny and great performances.”

“It should also be a giant commercial for the movie business, which we all need to keep going,” Todd said, noting that the show would emphasise the 90th anniversary milestone.

Channing Dungey, president of entertainment at ABC, which will broadcast the ceremony live, has echoed Todd in a separate interview.

“We certainly want to honor and respect Time’s Up and allow that message to be heard,” Dungey said. “But we’re trying to make it more planned than spur of the moment — it has its moment and then doesn’t feel like it overshadows the artists and films being honored.”

Dungey added of Time’s Up, “I would love for every award recipient to not feel like they have to acknowledge it independently.”

Representatives of the Time’s Up campaign have declined to comment. Two people involved with the effort, speaking on the condition of anonymity to discuss internal deliberations, has said that the group was talking with producers about having an in-show presence, but details were still in flux.

The campaign has also decided, these people said, not to ask stars to wear black — although a Time’s Up label pin would be appreciated — and that there was no coordinated effort for actresses to bring activists as guests, as there was at the Golden Globes. Some celebrity supporters will probably use red-carpet interviews to raise awareness for the Time’s Up legal defense fund. About $21 million has been raised so far.

At the same time, the red carpet preshows are tacking back toward their sweet spots. Jennifer Neal, an E! executive vice president, said in an email that “viewers enjoyed hearing more about the #MeToo and #TimesUp movements” at the Golden Globes, “but they also expressed wanting to hear about other subjects as well, including fashion and entertainment, so we’re looking to balance this out in our live coverage” at the Oscars.

Attempts to keep the Oscars on the sunnier side reflect ratings concerns inside ABC and the Academy of Motion Picture Arts and Sciences. Most people watch award shows for the glamour.

Whenever stars use the platform to support progressive causes and make political statements, large numbers of viewers turn the channel, according to academy insiders, who cite minute-by-minute Nielsen data for past shows.

Live television viewing has been waning for years, but ratings have lately tumbled for awards shows as they have tested the public’s tolerance for mixing serious causes with frothy self-celebration.

Despite intense media attention on the black attire of attendees, ratings for the 75th Golden Globes in January dipped 5 percent compared with the 2017 telecast. Viewership for the Screen Actors Guild Awards plummeted 30 per cent, hurt in part by competition from football, while the Grammy Awards, which included a high-profile sketch skewering President Donald Trump, plunged 24 percent.

A Grammys-level drop would be a disaster. The Oscar telecast is a big business, generating roughly 80 percent of the academy’s $136.3 million in annual revenue.

ABC controls broadcast rights for the show until 2028 at a cost of roughly $75 million a year. Media buyers say that ABC was seeking as much as $2.8 million per 30-second commercial this year.

Rita Ferro, president of ad sales for the Disney-ABC Television Group, declined to discuss pricing, but said that inventory for the telecast was sold out. “People are excited to be part of what tends to be an always positive and uplifting show,” Ferro said, adding that the telecast would feature 12 custom-made ads focused on female empowerment and diversity.

The tone of the Oscars telecast has been the subject of Hollywood speculation for months, ever since The New York Times and The New Yorker revealed decades of sexual harassment allegations against Harvey Weinstein, sparking the #MeToo conversation.

Some envisioned an Oscars stage draped in black to honor victims and atone as an industry for turning a blind eye to men like Weinstein. Others argued that the academy had done its part — ousting Weinstein, implementing a code of conduct for members — and should hold its party as usual.

ABC has left little mystery about what kind of show it would like to see. One promo emphasizes blockbusters like Wonder Woman — the opposite of the current best picture contenders, which are mostly art films — and plays up stage extravaganzas mounted at Oscars past. The word “sizzle” takes over the screen at one point.

Efforts to tilt the telecast away from politics and causes may prove futile, of course.

“Who am I to say what they should and should not get to say?” Todd said of the winners. “As a producer of the show, your only hope is that the speeches are emotional and really excite the room and aren’t read off a piece of paper.”

As Dungey pointed out, “With a live show, anything can happen — just look at last year.” She was referring to the envelope chaos at the culmination of the 89th Academy Awards that found Faye Dunaway and Warren Beatty erroneously giving La La Land the trophy for best picture. Moonlight was the correct winner.

One person not on the list: Casey Affleck, who won best actor last year and, based on tradition, would normally return to present the best actress prize. It was announced in January that Affleck, who has settled sexual harassment lawsuits in the past, would not attend.

In a statement at the time, the academy said, “We appreciate the decision to keep the focus on the show and on the great work of this year.”