Oscars 2020: Brad Pitt thanks his kids and takes on Trump 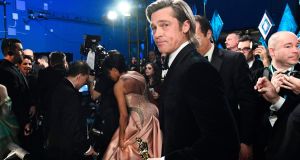 The 56-year-old actor, who won the award for his role in Quentin Tarantino’s Once Upon a Time in... Hollywood, began with a reference to President Trump’s impeachment trial and its blocking of John Bolton’s testimony. “They told me I only have 45 seconds up here,” said Pitt, “which is 45 seconds more than the senate gave John Bolton this week.”

The star dedicated his award to “my kids, who colour everything I do – I adore you”, before paying tribute to Tarantino, whom he described as “an original – one of a kind. The film industry would be a much drier place without you.” He also gave a shout-out to his parents, to stuntpeople and to his costar Leonardo DiCaprio, on whose coat tails he said he was “happy to ride – the view’s fantastic”.

Pitt has already won a string of prizes for the role, including best supporting actor at the Baftas, Golden Globes and Screen Actors Guild. This is his first Oscar for acting; he has previously been nominated for best supporting actor for 12 Monkeys and best actor for The Curious Case of Benjamin Button and Moneyball. But his work as a producer has seen him win a best-picture Oscar for 12 Years a Slave and earn best-picture nominations for Moneyball and The Big Short. – Guardian