Nicolas Roeg: the director who took the familiar and made it strange 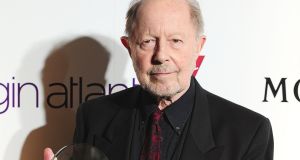 “I think I scratched surfaces that people would prefer were left alone,” Nicolas Roeg told The Irish Times a decade ago. “But all any of us has is this world and the people that inhabit it. There’s a quote from an artist – I can’t remember who – ‘I take the familiar and make it strange.’”

Roeg, who has died at the age of 90, was in Monaghan to shoot an adaptation of Fay Weldon’s feminist satire Puffball. He had a point about some people being wary of his vision. Puffball was his first feature in 12 years and it proved to be his last. Yet more than a few of the incoming obituaries will, with much justification, argue that he was the finest British director of his generation.

The string of exemplary features that ran from Performance in 1970 to Bad Timing in 1980 went to places few other contemporary directors dared. Walkabout (1971), set in the Australian outback, touched on teenage sexuality and the deadening repression in contemporaneous civilisation.

The storytelling was oblique. The angle on sexuality was uncomfortable

The Man Who Fell to Earth (1976), featuring David Bowie’s best performance by far, gawped wide-eyed at the empty pleasures of consumerism. Don’t Look Now (1973) opened Donald Sutherland and Julie Christie up to the withering effects of grief in an eerie version of Venice that seemed layered with unseen ghosts long before the real menace showed itself.

Few of those films were substantial hits. Some triggered critical punch-ups. But, in a decade when British cinema went into virtual hibernation, Roeg stubbornly kept the standard aloft for innovation and cultural adventure. The storytelling was oblique. The angle on sexuality was uncomfortable. More an inheritor of Michael Powell than David Lean, Roeg deserves a position in the pantheon of great English eccentrics.

Roeg achieved fame as a cinematographer some time before his directorial debut. Born in London in 1928, he made his way hopefully towards the film industry after National Service. He served time as a clapper-boy and general dogsbody before graduating to camera operator on such pictures as The Trials of Oscar Wilde and The Sundowners.

Roeg did second unit work on Lean’s Lawrence of Arabia (1962) and, following famous fallings out, was eventually fired from the same director’s Doctor Zhivago (1965).

He would deserve a place in any film encyclopaedia for his glorious, boldly coloured direction of photography on Roger Corman’s The Masque of the Red Death (1964), François Truffaut’s Fahrenheit 451 (1966) and John Schlesinger’s Far from the Madding Crowd (1967). Roeg’s shots of a heavily eye-linered Julie Christie and a pouting Terence Stamp in that last film are among the defining images of swinging England.

Later on, when he made his name as a director, critics sometime suggested the elaborate visual compositions betrayed his origins behind the camera. Roeg wasn’t having it. He told me: “There is a very distinguished critic – I won’t say who it is – who used to always say: ‘Nicolas Roeg was a cinematographer and you can tell it from his films’. Bullshit! I couldn’t tell what he did before he was a critic from his writing. Could I?”

His first project as director encountered all kinds of catastrophes. Co-directed with the erratic Donald Cammell, Performance (1970) starred Mick Jagger as a reclusive pop star who ends up accidentally sheltering a ruthless gangster played by James Fox. Shot in 1968, the picture was held back for another two years while Warner Bros pondered its controversial melange of sex and violence. It is now seen as an unimpeachable, cynical classic that has aged much better than more groovy attempts to engage with the era.

Walkabout, starring Jenny Agutter as a teenager encountering an aboriginal boy after becoming abandoned in the outback, received strong reviews but struggled to find an audience (contemporary critics are now less happy with the “noble native” themes in Edward Bond’s script).

Everyone now loves Don’t Look Now – and snorts at the absurd suggestion that the famous sex sequence wasn’t staged – but it didn’t seem like an easy sell at the time. Released on a double bill with The Wicker Man, it became a significant hit in the UK, but, following mismanagement, struggled at the US box office.

Adapted from a story by Daphne du Maurier, the picture established Roeg as a singular talent with an inimitable voice. With its characteristic shuffling of temporal order, Don’t Look Now does not look like the work of any other director. He felt, however, that critical support came too late to grant him the career he really wanted.

“I was censored. I was derided,” he told me. “I remember when I made Bad Timing, which is rather well thought of now, one review just said: ‘There’s weird and there’s Bad Timing’. That was all it said. Not very helpful.”

He was right about the reception granted Bad Timing. Featuring a famously awkward scene in which Art Garfunkel forces himself on an unconscious Theresa Russell (later to marry Roeg), the picture – again playing to a shattered timeline – seemed calculated to repel potential distributors. But it too has held up. The use of Keith Jarrett’s The Köln Concert is magical. The unease is palpable. It won the People’s Choice at the Toronto Film Festival and the London Film Critics Circle Award for Best Director, but was ignored by Bafta. As for the Oscars . . .

Though he was sometimes misused and occasionally misrepresented, Roeg does not count as one of cinema’s lost men

Roeg did struggle in succeeding years, but he was not cast into total exile like Michael Powell. In the 1980s he made fascinating films such as Eureka (1983) and Insignificance (1985). His agreeable 1990 version of Roald Dahl’s The Witches was again troubled by distribution worries, but it now plays endlessly on bank-holiday afternoon telly. A 1994 TV version of Joseph Conrad’s Heart of Darkness made interesting use of Tim Roth and John Malkovich.

Though he was sometimes misused and occasionally misrepresented, Roeg does not count as one of cinema’s lost men. Few directors in the history of the medium have made so many films that touch on the status of masterpiece. He formulated a singular language – contorted narrative, awry angles, jarring edits – which has influenced many, but which has proved impossible to copy.

Pondering his tricky career, talking in his characteristically discursive, meandering style, he drew on a scene from John Huston’s The Treasure of the Sierra Madre as we sat in the Ulster sun 10 years ago.

Nicolas Roeg is survived by his wife, Harriet Harper, and his six children.