Boots Riley: More than happy to bother you

Directed by Boots Riley, Sorry to Bother You follows Cassius Green as he discovers a magical key to professional success. 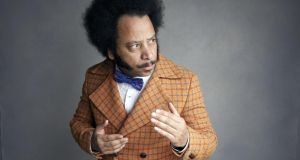 Boots Riley, director of Sorry to Bother You, photographed by Taylor Jewell/Invision/AP

Last August, a minor kerfuffle broke out around the release of Spike Lee’s BlacKKKlansman, when rapper and filmmaker Boots Riley posted a three page essay on Twitter. While Riley was careful to acknowledge Lee’s influence, he took issue with BlacKKKlansman’s heroic depiction of Ron Stallworth’s activities as part of the FBI Counter Intelligence Program (Cointelpro).

Those objections seemed to have worked out well for all parties. BlacKKKlansman went on to gross more than $87 million at the box office, making it the second biggest film of Lee’s career. Riley’s debut feature, meanwhile, was finally picked up by Universal for international distribution.

Watching Sorry to Bother You, you wonder what took them so long. A hit in the US with a starry cast attached - including Thor Ragnarok’s Tessa Thompson, Armie Hammer, and Danny Glover - at one time it looked as though Riley’s film was about to fall victim to the outmoded Hollywood axiom that “black films don’t travel”.

“Even tho we’re outperforming a gang of other movies,” Riley tweeted last summer. “Distributors r claiming “Black movies” dont do well internationally and r treating it as such. There’r films that bombed here, that theyr distributing.”

That would have been nothing short of a tragedy. Sorry to Bother You is not just the most important feature of the year. It’s also the most entertaining. A madcap satire with racism and capitalism firmly in its sights, Riley’s audacious comedy concerns Cassius (Lakeith Stanfield), a broke telemarketer struggling with cold-calls and instant hang-ups.  An older, more experienced colleague played by Danny Glover offers a hot tip: use your white voice.

When Cassius starts to sound like David Crane on the phone, he becomes a huge success, moving out of the garage owned by his uncle (Terry Crews) and into a swish apartment with his artist-activist girlfriend, Detroit (Tessa Thompson), He also comes to the attention of the top floor executives, including the company’s sinister, swinging CEO, Steve Lift (Armie Hammer), just as his co-workers are attempting to unionise. And that’s when things get really weird. It’s hard to think what the elevator pitch might have sounded like.

“I would just say this movie is an absurdist dark comedy with magical realism and science fiction inspired by the world of telemarketing,” smiles Riley from under his instantly recognisable afro. “Then I’d come in with the title and that sounds funny, and people want to hear more about it and  I’d just tell the story in a concise way, and talk about some of the aesthetic references and things like that.”

Sorry to Bother You represents years of toil for the frontman of the fierce and frank hip-hop collective, The Coup. The project has found many admirers and champions since Riley completed the first draft in 2012. The author Dave Eggers was an early fan. In 2014, an early version of the unproduced screenplay was published in McSweeney’s. Through Eggers, Riley met Spike Jonze who talked him through the making of Being John Malkovich. Having connected with producer George Rush, Riley landed a year-long film residency at San Francisco International Film Festival’s (SFFILM) FilmHouse followed by a stint at the Sundance Institute’s Feature Film Program.

“I got it first to David Cross and Patton Oswalt, and they immediately said: yeah use our names but that wasn’t enough to get a movie funded back then,” recalls Riley. “Dave Eggers told me: ‘Don’t direct this; you don’t want to direct. You want to write movies. You can write four movies before you get this made’. But what I did as a director was as important to me as the writing. I got advice from Ted Hope who is now head of Amazon Studios. I ran into Guillermo del Toro and pitched him the movie, and he shows me all his secret drawings of like The Hobbit. He didn’t have the time to mentor me but he answered my questions and emails, and helped me find different effects companies. I reached out to Ava DuVernay on Twitter. At the writers lab at Sundance I met people like Walter Mosley and Catherine Hardwicke, who let me use her guest house when I was in LA trying to get funding. David Gordon Green had me shadow on his projects. He was an adviser at Sundance and when he got there we were playing the stuff I was working on the week before. I met him because he yelled out in the theatre: ‘Boots Riley, you’re a crazy motherf***er’.”

Raymond Lawrence Riley or Boots to his friends was born into a politically active family in Chicago in 1971. His father, the social justice attorney Walter, has worked for the NAACP, the United Auto Workers, and Black Lives Matter. His grandmother, Anita, ran the Oakland Ensemble Theatre and a poetry festival. At high school, he rewrote West Side Story in rap.

He was attending film school in San Francisco State when he was offered a record deal with EMI. His work with the Oakland-based hip hop group The Coup is as funny as it is aware. Side projects include the Mau Mau Rhythm Collective and Street Sweeper Social Club, the band he formed with Rage Against the Machine’s Tom Morello.

Like Morello, Riley has long been politically active: at 14, he joined the International Committee Against Racism; at 15, he joined the Progressive Labor Party. He’s worked alongside such community-based organisations as the Women’s Economic Agenda Project (WEAP), Copwatch, and the Black Panther Alumni Association. In 2003, he appeared with Tom Morello, Billy Bragg, and Nami Klein on the ‘Tell Us the Truth Tour’.

He’s reluctant, however, to use c words - communism, capitalism - in his work.: “I haven’t in my songs because I want to talk about how things are as opposed to like be like, hey, I know this word, you know? It’s more likely to lead someone to investigate how things work.”

Sorry to Bother You is a screwy sci-fi hymn to the power of a union and civil protest. But watching the film’s damning (and scarily accurate) representation of low-waged, zero-contract employment, one can’t help but wonder if it can be reformed.

“Well, if someone said I want to make a movie that says this shit is not reformable but needs to be dismantled, that wouldn’t get me excited,” says Riley. “Yeah, I’ll be like, okay, I agree with that. But I could just talk about it in speeches or whatever. I feel that revolutionary movements have to have reform struggles as part of that movement. I mean they always have. The question is how does the struggle engage people? It wasn’t just Ho Chi Minh. It was a massive movement. If you think about Cuba, they they were having general strikes at the same time that Che was coming over the water. That’s the romantic part. The part that people talk about. But somebody had to organise and get all of these workers to be shutting shit down. Now they are looked at as different movements. But those are the people that became the revolution, not just whatever number of folks came over the in the boat with with Fidel.”

Today, Riley is in London for the UK premiere of his debut feature which, inevitably, is the hottest ticket in town: “They wear their imperialism on their jacket here,” he laughs. “I can’t say if that’s better worse or better. In the US people are always surprised by it: what, like, we own Guam?”

Riley is understandably cynical about US politics, in particular, the top job: “Obama was a lesson in electoral politics because of the folks that convinced him to run would definitely thought of as revolutionaries. You know, Bernardine Dohrn and the Weather Underground. That’s the fallacy of the presidential position, because it doesn’t matter even what was in his head. The function of that office is to be a puppet for the ruling class. It doesn’t matter who gets in. You could elect someone who does have revolutionary policies and either they’re going to get kicked out of that office or they’ll do most of the stuff that George W Bush and Obama and Trump have done.”

No wonder that every last centimetre of Sorry to Bother You is festooned in incendiary, yet hilarious slogans, right down to Tessa Thompson’s earrings. It’s a tone that won’t surprise fans of The Coup’s brilliantly satirical storytelling skills.

“I tried to make an important film,” says Riley. “I mean that was lone of the ways that I brought people in. I’d say you can make all these other things or whatever but here’s the here’s something. Who knows?  It’s for history to tell but that’s what I aimed to do. I want my art to have an impact in some way.”

Sorry to Bother You opens on December 7th