Review: This documentary follows an unlikely journey across treacherous seas 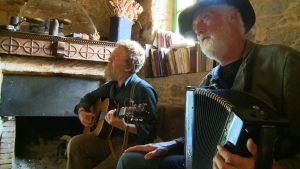 Glen Hansard and Brendan Begley in The Camino Voyage

There’s plenty of learning and plenty of soul in Dónal Ó Céilleachair’s documentary on an unlikely journey across treacherous seas.

It requires one sort of resolution to walk your way to Santiago de Compostela in northern Spain. That pilgrimage has destroyed more than a few men and women. It takes another class of determination to row all the way from Ireland in a traditional naomhóg.

Ó Céilleachair’s film is as unhurried and lolloping as the journey – if a deal less gruelling. We observe the men as they make friends along the French coast and introduce those new acquaintances to Irish songs and traditional beverages.

The characters emerge slowly as we lean in towards overheard conversations. Holden seems the quietest of the bunch. Moriarty is at home to conviviality. Danny Sheehy, known also as Domhnall Mac Síthigh, asserts his apparent captaincy with quiet assurance. Glen seems, for a Dubliner, impressively confident on the waves.

Viewers hoping for struggles against looming maritime catastrophes may find themselves a little disappointed. Though the journey is a hard one, The Camino Voyage never comes across as a rival for Kon-Tiki.

A tragic epilogue does, however, confirm the very real dangers that attend such voyages. Last year, Danny Sheehy died when the naomhóg capsized off the coast of Portugal. The film stands as a worthy memorial.