Robin Hood: Idiotic film can’t even get its absurdities right

Review: The clothes are bizarre, the accents are all over the place, and the hero’s a bit odd 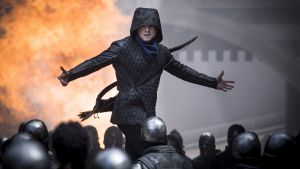 Give the children what they want. More Pinky and Perky! More Dan Dare! More Robin Hood!

Okay, that’s a little unfair. The Robin legend goes back a few centuries and, as recently as the early 1990s, it generated a smash with Robin Hood: Prince of Thieves. Still, if you want space in ours cinema, you’d better have a fresh take on the thing. I’m talking to you, telly director Otto Bathurst. Are you listening, Taron Egerton?

The latest incarnation does have ideas. Unfortunately they’re all as underdeveloped as they are misguided. Like Guy Ritchie’s recent, slightly less terrible variation on King Arthur, the film owes more to Assassin’s Creed than it does to any ancient chronicles.

Nottingham, a city rarely celebrated for its azure coastline, is re-imagined as a dusty Mediterranean fantasy with dreaming spires and exotically dressed clergy. Egerton plays Robin of Loxley as a fleet-footed rogue who can deliver arrows in implausible rapid fire. Like in Assassin’s Creed.

Hang on, do we mean Call of Duty? Early on, Robin receives a hilarious anachronism on high-quality parchment. His call-up papers demand that he report for the “Third Crusade in Arabia,” (as if someone were asked to report to “the first World War” in 1914).

Dressing the crusaders in grey uniforms with padded tunics that look like flak jackets, the film-makers re-imagine that ancient conflict as the second Iraq War. It’s idiotic, but it’s carried off with undeniable élan. Catapults stand in for airstrikes. A complex crossbow does the job of a machine gun.

There’s potential here for some dumb fun, but everything falls to pieces when Robin returns home with (I guess) PTSD.

An old adversary in the form of Jamie Foxx – named John, but not quite Little John – encourages our hero to take up arms against the tyrannical Sheriff of Nottingham (Ben Mendelsohn in his Star Wars role). He trains Robin to shoot at targets, he spills mystic lore and he chops the archer’s quilted jacket into a medieval anorak.

The clothes are bizarre all round. Mendelsohn is wearing the sort of sleek, weirdly collared coat that actors wear in bad Shakespeare productions that gesture to generic fascist dictators. The hard-working Eve Hewson, ill-served as Marian, goes about in a low-cut thing more suitable for those outlying Vegas casinos that missed re-invention in the 1990s. Would it kill them to hitch themselves to one, consistent anachronism?

Anyway, more has changed in Nottingham-by-the-Med than Robin initially feared. The oddest sequence in the film (and that’s saying something) finds our protagonist throwing up violently when he spots Marian snogging a notably unmelodic Will Tillman (Jamie Dornan). Jesus, grow a pair, Robin Anorak. You wouldn’t have caught Errol Flynn puking his ring if he spotted Olivia De Havilland stuck to a stray minstrel.

Maybe his stomach has been turned by the rich stew of competing accents. Eve has gone Northern Irish for no apparent reason. Playing an underpowered Friar Tuck, Tim Minchin retains his tight New Zealand vowels.

Despite being midlands nobility, Robin speaks in pure, undiluted estuary. Once again, could we just agree on one unifying absurdity?

No such chance. The competing terrible ideas accumulate as we career towards an absurdly optimistic epilogue. You won’t need to be told that the Sheriff is a Trump stand-in – assume all movie villains are that unless we tell you otherwise – but his suggestion that Muslims “hate our freedoms” takes us back to George W Bush. Eventually seen wielding an actual petrol bomb, Will seems to have something Antifa about him. And so on.

After the closing conflagration, a hopeful voice tells us that this is not the end of the story. I’m betting it is. The recently late William Goldman argued that: “nobody knows anything”. I think we know that.