New ‘Star Wars’ film to shoot in Donegal and Kerry

JJ Abrams, the director of Star Wars: The Force Awakens explains why he chose Skellig Michael to be a location in the movie. Video: Tourism Ireland 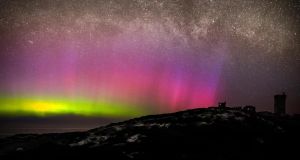 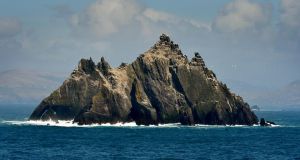 The producers of Star Wars have confirmed they are returning to Ireland this year to shoot scenes for the next film in the blockbuster series at locations along the western seaboard.

Lucasfilm is preparing to film sequences for Star Wars: Episode VIII in May at the western tip of the Dingle Peninsula, where contractors are installing a 1.5km metal roadway to facilitate the transport of gear and crew.

Plans are also underway to film at Malin Head in Donegal, where a number of B&Bs and rental homes have already been booked out for the production.

The chief executive of the Irish Film Board, James Hickey, said it was “delighted to welcome the production of Star Wars: Episode VIII to some of our most spectacular locations along the Wild Atlantic Way”.

The closing scene of Star Wars Episode VII: The Force Awakens, the most recent release in the series, was shot on Skellig Michael off the coast of Kerry. The film currently ranks as the third highest-grossing release of all time, with more than $2 billion worth of cinema tickets sold worldwide.

The Government’s decision to grant permission to film on the UNESCO world heritage site was criticised by some heritage and environmental groups, but a further licence was granted to Lucasfilm to carry out filming last September for the new film.

“The beauty of Skellig Michael was stunning and we know the new locations along the Wild Atlantic Way will prove to be equally as beautiful in Star Wars: Episode VIII,” Ms Campos said. “We want to thank the people of Ireland for their warm welcome and continued support. Ireland has become an important part of Star Wars history.”

Minister for Arts, Heritage and the Gaeltacht Heather Humphreys said the return of Star Wars to Ireland was a further boost for the Irish film sector.

“My department has been working with Disney Lucasfilm over recent months in a bid to accommodate the return of Star Wars to Ireland,” Ms Humphreys said. “Disney Lucasfilm have developed a strong affinity for Ireland, and I am delighted to see them return to Ireland for further filming around our beautiful and dramatic coastline.

“We have already seen how the most recent Star Wars film has brought Sceilg Mhichíl and southwest Kerry to a global audience. Now, further locations around the Irish coast will experience similar exposure, providing untold benefits to the tourism and film sectors.”