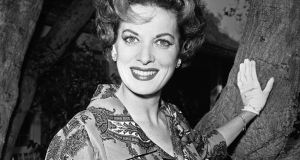 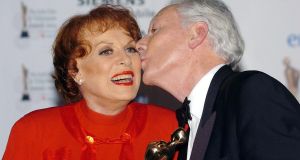 Maureen O’Hara, who has died at the age of 95, being kissed by Gay Byrne after he presented her with her lifetime achievement award at the Irish Film & Television Awards. Photograph: Haydn West/PA Wire

It may seem odd to describe a middle-class lady from Ranelagh in the following terms, but, with the death of Maureen O’Hara at 95, cinema has lost a one of its great exotics.

From 1939, when she appeared opposite her mentor Charles Laughton in The Hunchback of Notre Dame, to the late 1950s, when the business began to leave the old stars behind, O’Hara dealt in a Celtic fury that was every bit as foreign as Greta Garbo’s Swedish cool or Marlene Dietrich’s German insouciance. She was easily the biggest Irish star of Hollywood’s golden era. She may have been our biggest star ever.

Her most famous role was as Mary Kate Danaher in John Ford’s creamily delicious The Quiet Man from 1952. Of course, everything about the picture is counterfeit. We are looking at an absurd concoction - cheery IRA men, twinkly matchmakers, eccentric Protestants - prepared for and by Irish-American romantics.

Mary Kate is just as much a national cliché as any of the other characters: the fiery Irish redhead who secretly wants a strong man to tame her. The mistake is to imagine that the actors and film-makers were unaware of what they were up to.

One of the popular cinemas tasks in the mid-20th century was to construct fantastic, heightened versions of the real world. The Quiet Man may not tell us much about the West of Ireland during the early 1950s, but it offers us a legend powerful enough to compare with any handed down from antiquity.

The French have Marianne as an archetypal symbol of the French Republic. We have O’Hara as Mary Kate.

“I have often said that The Quiet Man is my personal favourite of all the pictures I have made,” she later said. “It is the one I am most proud of, and I tend to be very protective of it. I loved Mary Kate Danaher. I loved the hell and fire in her.”

The future movie star, the oldest of six children, was born as Maureen FitzSimons in south Dublin two years before the formation of the state. As a girl she studied drama in Rathmines and went on to train further at the Abbey Theatre.

It is said that her dad, a successful businessman, was not all that happy about her drifting into this insecure life, but she ploughed ahead and eventually secured a screen test in London. It was not a success.

Nonetheless, Laughton, among the great actors of his era, spotted star potential beneath the unsubtle make-up. In 1939, she appeared opposite him in Alfred Hitchcock’s Jamaica Inn and William Dieterle’s The Hunchback of Notre Dame. “Well, after I saw myself on the screen in Jamaica Inn, I realised that the girl up there was beautiful. I didn’t want to box the fox any more,” she said.

It would not be quite true to say that stardom followed automatically. The war intervened. The business stuttered. And O’Hara, now contracted to RKO, found herself cast in unmemorable low-budget pictures such as Dance Girl Dance and They Met in Argentina.

Ford rescued her from the slump when he cast her as Angharad Morgan in How Green Was My Valley (the film that famously beat Citizen Kane to the best picture Oscar). Cracking pirate flicks such as The Black Swan and The Spanish Main followed.

She was mother to Natalie Wood in the indestructible Christmas classic Miracle on 34th Street. She became one of the great female stars of the western in such films as Rio Grande and Buffalo Bill. The film writer David Thomson (not an unqualified fan) noted that in such films she was: “inclined to thrust her hands on her hips, speak her mind and be told: ‘You’re pretty when you’re angry.’”

It is impossible to understand O’Hara’s appeal in these years without taking into account the rise of Technicolor. With her red hair and green eyes, Ms O’Hara was made for showing off the process. She is the only thing more luminous than the painted backdrops in The Quiet Man.

Married on three occasions, O’Hara was every bit as outspoken in person as her characters were on screen. Her autobiography Tis Herself, published in 2004, displayed a stirring honesty about the industry’s cynical mechanics. “Cast as a Tunisian princess - I wasn’t up to making another lousy picture,” she said of Flame of Araby from 1951. “But Universal made their intentions known right away: Make the movie or be suspended. I had no choice but to make it.”

The good parts became harder to find as she attained middle age, and she moved away from acting following her marriage to Charles F. Blair, Jr, a distinguished aviator, in 1968.

There was, however, one last comic turn as John Candy’s overpowering mother in Only the Lonely from 1991. It’s not a great film, but the relationship between O’Hara and Candy is genuinely touching. “John Candy was one of my all-time favourite leading men. He was pleasant and courteous. He reminded me a great deal of Charles Laughton,” she said.

Maureen O’Hara is one of the many, many great stars who never won an Oscar. More surprisingly, she never even managed a nomination. The Academy rectified the situation in time (just) when she was granted an honorary Oscar last year.

Only she and the equally great Myrna Loy have received honorary statuettes for careers in acting without having been previously nominated. She was frail, but she still looked rather fabulous. “What’s this?” she commented. “I only hope it’s silver or gold and not like a spoon out of the kitchen.” Her Dublin accent remained almost entirely unaltered.