Manchester by the Sea review: A hyper-real dissection of macho despair

This exquisitely mounted depiction of unbridled misery pivots around Casey Affleck's performance, but as a character study, its trajectory simply has nowhere to go 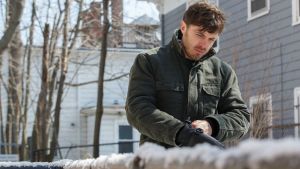 Male man: Casey Affleck in Manchester by the Sea

Film Title: Manchester by the Sea

Mere minutes into the New Year and we already have a lock for most misleading promotional campaign of 2017. Watching the TV spots for Manchester by the Sea, one might be forgiven for expecting an inspirational rom-dram starring Casey Affleck and Michelle Williams. This beautifully realised depiction of despair is many things, but inspirational is not one of them.

Unless, of course, your idea of inspirational is being hacked to death with splintered vinyl shards of a Joy Division album. Ms Williams, contrary to what the billboard would have you believe, is onscreen for around the same amount of time it takes Usain Bolt to medal in a 100m event.

Kenneth Lonergan, the brilliant writer-director behind You Can Count on Me and (the criminally undervalued) Margaret, wrote Manchester by the Sea as a means of articulating his own experiences with deepest, darkest depression. You can tell he’s drawing from life.

This exquisitely mounted depiction of unbridled misery pivots around Lee Chandler, an alcoholic janitor played by Affleck. By day, Lee plunges blocked pipes and gives lip to tenants of the buildings he services; by night, he gets stupidly, violently drunk and picks fights with anyone unfortunate enough to look sideways in his direction.

One morning, Lee receives word that his brother has had a heart attack. He leaves the city and ventures towards the fishing port of Manchester-by-the-Sea, to make arrangements for the funeral and for his brother’s surviving teenage son, Patrick (Moonrise Kingdom’s Lucas Hedges). A series of Proustian flashbacks slowly reveal the terrible events behind Lee’s pained existence, events that are so ludicrously tragic they would put most operas to shame.

The torment is palpable, the script is hard-hitting and Jennifer Lame’s editing is a marvel. Yet Lonergan’s third feature film is made problematic, often by its own hyper-realistic representation of despair. As a character study, its trajectory simply has nowhere to go.

Leslie Barber’s choral score – a series of impressive variations around Handel and Albonini – would be awe-inspiring in any other movie. Here, however, all those angelic voices work against the film’s intense focus on its protagonist’s lonely grief.

The female characters, meanwhile, make one yearn for the comparative complexity of the Bond babe. When Lee gets drunk, he’s in pain; when his sister-in-law does the same thing, she passes out indecorously, leaving her vagina exposed for all the family to see.

Towards the not-inspirational end, Williams finally shows up for her crying scene replete with genuine snot (hey, it’s Michelle Williams, so that’s not a spoiler). She breaks down in floods of self-pity and guilt before snapping back to her other, moved-along life. In Manchester by the Sea, men are soulful and women are shallow, a gender gap that wounds this otherwise compelling drama.