Magnus review: a gloriously fun ode to the ‘Mozart of Chess’

He check-mated Bill Gates in nine moves, he turned down JJ Abrams offer of a part in Star Trek - and now Sven Magnus Øen Carlsen deservedly has a movie all to himself 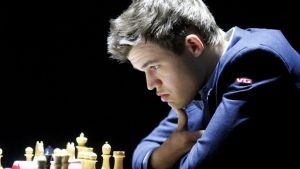 Norwegian chess supremo Sven Magnus Øen Carlsen. As well as his genius at the board, the film shows glimpses of his “humanity and warmth”.

In 2004, aged 13, Sven Magnus Øen Carlsen, drew with Garry Kasparov, and became the third-youngest grandmaster in history. The Norwegian prodigy has gone on to achieve the highest World Chess Federation ranking in history and capture the public imagination like no player since Bobby Fischer.

He is the “Mozart of Chess”, whose nine-move checkmate game against Bill Gates has been viewed millions of times, and a G-Star Raw model whose celebrity chums include Liv Tyler and JJ Abrams.

The filmmaker and mega-producer offered Magnus a role in Star Trek Into Darkness. He declined. Because of chess.

Utilising hours of home movies made by Magnus’s doting engineer parents and sisters, director Benjamin Ree fashions something akin to Richard Linklater’s Boyhood, as footage takes us from Magnus’s clumsy childhood toward a virtuoso adolescence.

His father notices early on how the youngster analysed a Lego set for hours after completion. That tendency is later complimented by Magnus’s attacking flair and intuition.

This portrait, accordingly, is not short on razzle dazzle, often akin to watching Benedict Cumberbatch in full flight as Sherlock Holmes. Gasp at a 2013 event at Harvard University wherein Magnus plays 10 top players in simultaneous games; he beats them all, while blindfolded. Swoon as the young daredevil journeys to Chennai, India, to take on the reigning World Chess Champion, Viswanathan Anand, a veritable human computer.

There is very little about Magnus’s personal life; one suspects there is little to tell. Most of his time, he admits, is given over to chess, to analysing games and fragments of games. His humanity and warmth is glimpsed, nonetheless, in his fondness for his sisters and for Donald Duck, and in his occasional frustrations at the board.