Macho, macho men – at least until mom enters the room 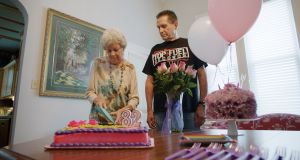 A scene from Mom and Me 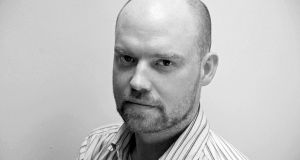 In 2010 Ken Wardrop scored a most unlikely box-office hit with His & Hers. The film, in which 70 women from the Irish midlands – aged from one to 90 – discussed the men in their lives, wowed civilians and professionals alike and picked up the world cinematography award at Sundance.

For its director, it wasn’t a portrait of everywoman: it was a portrait of one woman, his mum. She has turned out to be something of a talisman for Wardrop: Undressing My Mother – his graduation film from Dún Laoghaire Institute of Art, Design and Technology – won an Ifta, a European Film Award and more.

“I was always the kid in the house getting told by my grandmother to go out and play,” says Wardrop. “But I preferred to stay in listening to the women and the chit-chats. I’d be laughing away.”

We have had to wait six years for Wardrop’s sophomore feature. “It was called Men in Uniform at one stage. I did want to push out of my safety zone a bit. I had questions: maybe I’m just good with women? Maybe I’ll try to talk to men? I knew I could make a feature in Ireland, but I didn’t want to go somewhere too exotic. So America seemed right.”

Wardrop suspects that his long-term collaborators – producer Andrew Freeman and cinematographer Kate McCullough – knew from the get-go that the director would ultimately circle back towards familiar terrain.

Somewhere during the development process, Men in Uniform transformed into Mom and Me, a film examining the sometimes fraught, sometimes doting bond between adult males and their mothers.

“I did try my best to make it different. But I was drawn back to a similar theme. I was really attracted to the idea – particularly as a gay man, I suppose – on masculinity and how mothers impact on masculinity.”

Mom and Me may revisit the director’s pet preoccupations, but in other respects it is a very different animal than His & Hers.

It all began with an idea to use a DJ and a call-in show. Enter Joe Cristiano, a host on Oklahoma’s Liberty Talk Radio.

“My very first search on YouTube, I typed ‘American radio host small town’ and Joe was the first guy that popped up. Here was this quintessential New York Woody Allen-esque guy, and he made me laugh. But I put him aside and moved on to the next video. We ended up making contact with about 20 radio hosts. But nobody was better than Joe. And it turned out that Joe – who had never lost that broad Italian New Yorker accent – had moved to Tulsa, Oklahoma, 30 years ago, after he had fallen in love with an Oklahoma lady.”

A subsequent search uncovered a poll naming Oklahoma as the most masculine state in the US, which, Wardrop notes, “seemed to fit perfectly”.

He had his state, now he just needed that state’s sons. But how? For His & Hers, Wardrop utilised small ads in local papers, mother-and-toddler groups and the camogie clubs of Co Offaly. Now an ocean lay between him and potential subjects. So the director and his researchers hit the phones.

“I couldn’t tell you how many calls,” he says. “Hundreds, anyway. We called bars, barbers, football teams. We called prisons until we found one that would give us access.

“They reached out to their inmates, and that’s how we found Jefferson, who you see in the film. We did find the cowboy preacher on an internet search. But the rest were phone calls.”

How does one pitch the project by cold call? Tell me about your mother? “We just kept talking. You have to build up trust. If we knew it was a difficult story we’d say, ‘This is something we’d love to cover.’ Parental relationships aren’t all loved-up and happy – they can be complicated or confusing.

“We said upfront that if you’re not going to give us warts and all, then this is probably not for you. But if you think this could be some sort of potentially cathartic experience . . . ”

So Mom and Me, which received rave notices when it premiered in Telluride last year, features a fascinating collection of individuals: the gun-toting Iraq veteran, a 63-year-old “medicine man”, an imprisoned former drug addict, a chatty lawyer and a rancher who finally tells his mother that, growing up, he felt she never loved him.

They come from all walks of life and yet they all share something in common: a decided lack of macho swagger when mom is in the room.

“I don’t think that’s any different to Irish men,” says Wardrop. “When it comes down to it, when we’re with mum, we become their boy. One of the cowboys was as masculine as anything. He went shooting in the day. He went camping alone with his dog. No mobile phone. He went to dodgy bars at night. But bring in the mammy and he’s that little respectful boy. That was intriguing.”

Wardrop, who in person is every bit as genial and warm as his films, says that his unique brand of anthropology privileges “little ordinary, quirky things that make us all laugh” over academic or ethnographic weight. Still, watching Mom and Me, one can’t help but hypothesise: if His & Hers is his mum’s story, is the new film his story?

“I hadn’t thought of that. But now we’ve discovered it, I think that’s what I’m going to tell everybody from now on.”

Mildred Pierce (1945)
Joan Crawford is the indulgent parent of the title who has her heart broken by a spoiled, social-climbing daughter.