Ma: Octavia Spencer is wasted in a low-brow horror with notions 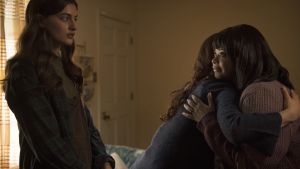 Oh, has awards season started early? Octavia Spencer and Allison Janney, two recent Oscar winners, appear in a film from the man who gave us The Help. Spencer plays an assistant veterinarian who struggles to care for a disabled daughter in a rundown corner of the Midwest. That really does sound like Golden Globe bait. Shouldn’t the leaves be turning brown?

Appearances can be deceptive. Ma is an emanation of Blumhouse Productions – the horror house founded by Jason Blum – and (with exceptions to be noted) it tends more towards that studio’s Happy Death Day than it does to the same company’s Get Out. Formed from discarded remains of at least three familiar Stephen King plots, the ramshackle construction is not without its horrid charms. There is creative bloodletting. There are sudden unearthly appearances to compare with those by Isabelle Huppert in Greta. There is, in short, enough raw entertainment to compensate for the fact that the edifice is held together with chewing gum and bloodied sticking plaster.

It starts off well enough. Erica (Juliette Lewis) and Maggie (Diana Silvers), her daughter, have just moved back to the town where the older woman grew up. Maggie soon falls in with a gang of mildly debauched teenagers and learns the best spots to get drunk. One evening, when trying to persuade passing adults to buy them beer, they encounter Sue Ann (Spencer), an apparent good sport, and they take to partying in her basement. All kinds of inappropriate stuff are going down here. Sue Ann won’t permit swearing, but she does allow her guests to behave like kids in the early verses of a doomed-teenager ballad from the 1950s.

Anybody who believes that Sue Ann is anything other than a maniac can never have seen a horror film (or even a film) before. Her scheme is made rapidly apparent, but the picture still feels the need to spring supposed revelations every 10 minutes. It’s as if Citizen Kane allowed another hour of sledging flashbacks after the final reveal (this is the only comparison we’ll make here with Citizen Kane).

Having directed the actor to that Oscar for The Help, Tate should be aware of the potential for playing light against dark. But neither counterpoint nor subtlety is in great supply here.

Happily, Spencer is good enough at the evil stuff (can we say “less focused Annie Wilkes” without alerting the spoiler police?) to keep us diverted until a scattershot conclusion that invites a busload of anxieties into the viscera-drenched living room.

There are some racial arguments – interesting notions, clumsily handled – in those latter stages that would have been better left to Blumhouse alumnus Jordan Peele, director of Get Out.

Nothing in Tate and Scotty Landes’s script suggests he has an ounce of that film-maker’s satirical inventiveness. The film works as a hammer-blow shocker with interludes of drop-your-cola humour. The weirdly starry cast provide unexpected class to a picture that might once have been released in SCARO-VISION.

Its faint pretensions to social meaning only get in the way of a perfectly admirable low-brow mission that is already impeded by too many subplots and hanging loose ends. Stephen King would have knocked those elements into shape.

Janney is barely in it, by the way.

Opens on May 31st