Juliette Binoche throws herself at the camera with admirable abandon, but Bruno Dumont’s brave step into comedy frustrates as often as it delights 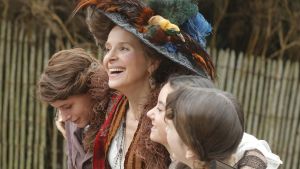 Bruno Dumont, once notorious for rural dourness, makes another brave step into comedy with a gorgeous, funny, infuriating period piece that lacks only structure in its lunge for the top rung.

Is it fair to ask that a work of surrealism – Jacques Tati from Hell – arrange itself in ordered fashion? Probably. Yes, the film thrives on absurdity. We don’t ask questions when Machin (Didier Després), a huge police officer, takes flight like a rogue barrage balloon. But the film’s oddities seem thrown together in random fashion that frustrates as often as it delights.

Returning to his home turf in the Calais region, Dumont pitches his film as a clash between two cultures. Up on a hill, knocking about a concrete house “in the Egyptian style”, a holidaying bourgeois family look down on the impoverished fisher folk below.

André Van Peteghem (Fabrice Luchini), a stooped buffoon, is prone to making patronising comments about the lower orders’ honest toil. His wife Isabelle (Valeria Bruni Tedeschi) is slightly more organised, but she is just as disconnected from dirty reality.

As they arrive for the summer, a mystery is unfolding on the sands. Visitors are going missing. We quickly learn that members of a local fishing family are biffing the tourists on the head and eating them raw from buckets. (Apparently, the young ones taste better.) There seems little chance that the hopeless Machin, so fat he must lie on his side to examine ground-level clues, will be making arrests any time soon.

The film’s textures are a wonder. Acting very much in the clown style, the performers shriek and gurn to endless heightened effect. Luchini and Tedeschi form a gorgeously horrid couple. Juliette Binoche’s turn as André’s sister is a little more insecure, but she throws herself at the camera with admirable abandon.

In the lower depths, inhabiting a dwelling that could have been sketched for Dickens by George Cruikshank, Brandon Lavieville plays the titular Ma Loute – a young man who carries posh folk across the marshes for cents – as a barely animated swamp tree (not literally, though that would be conceivable in such an odd film). The brilliant sound design adds to the weirdness. Machin’s every move is accompanied by a soft grinding that suggests flesh easing against yet more flesh.

Set at the start of the last century, Ma Loute is mildly cross about the smugness of invading tourists and the misery of poverty. It is, however, pointless to strive for too much political or social meaning in such a deranged project. This was surely not intended, but, to this writer, it suggested a horrible deconstruction of the stories that used to appear in secondary school French books for Anglophones. Monsieur et Madame Van Peteghem au Bord de la Mer perhaps. What’s the French for cannibal?