The film director will receive a lifetime-achievement award at this month’s Ifta ceremony. But he’s still shouting, arguing and making ‘uncivilised’ movies 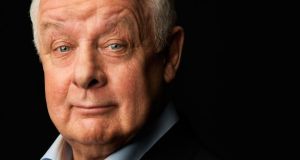 Jim Sheridan: “I did an ad lib asking kids about getting slapped at school. And within two hours we were off the air. Because the archbishop had called.” Photograph: Barry McCall 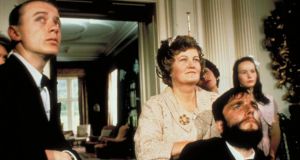 Late bloomer: Brenda Fricker and Daniel Day-Lewis in My Left Foot, the film Jim Sheridan exploded on to the movie scene with in 1989, at the age of 40

It’s midmorning at Windmill Lane Studios and Jim Sheridan – six-time Oscar nominee and recent septuagenarian – has taken a break from his Dublin postproduction duties on The Secret Scripture, his big-screen adaptation of Sebastian Barry’s 2008 novel, starring The Girl With the Dragon Tattoo’s Rooney Mara and Divergent’s Theo James.

He likes and admires Barry as a person and a writer, he says. That’s something of a theme with Sheridan; he speaks equally highly of Eoin Colfer, with whom he wrote a screen adaptation of Artemis Fowl (“the nicest guy you’ll ever meet”), John Boorman (“I’ve always felt I should emulate him, because he is such a good and decent man”), his brother Peter Sheridan (“I hope I’m thought of half as warmly as he is”) and any number of his old collaborators and muckers.

He’s generous in spirit toward others, but it’s hardly one-way traffic. On May 24th Sheridan will receive a lifetime-achievement award from the Irish Film & Television Academy, in recognition of, well, where to begin?

It is difficult to imagine what Irish cinema would look like without Jim Sheridan. We have that other twin titan, Neil Jordan, on the books, but both careers are, one feels, intertwined.

“The only person I can really define myself through is Neil Jordan,” Sheridan confirms. “Scorsese and Spielberg are, as you say, the same age as us. But they were far away. If you see the guy next to you making a movie you think, I can do that too. I’ll try to be as good as that.”

Jordan and Sheridan’s paths crossed early and often. In 1971 they cowrote Journal of a Hole, a play examining abuse in industrial schools in Ireland. They both appeared in the original production at Project Arts Theatre.

“I remember Neil’s dad was really upset by the title, because Pope John had written an autobiography called Journal of the Soul,” he says. “And our play was about the abuse of kids in Artane. So we were kind of socially conscious.

“But it’s hard to realise what Ireland was like back then. I worked on a programme for RTÉ called Motley. One day we needed an extra 10 minutes’ footage. I did an ad lib asking kids about getting slapped at school. And within two hours we were off the air. Because the archbishop had called.”

In the mid 1970s Project Arts Centre hosted a production by the London-based theatre group Gay Sweatshop. That went about as well as could be expected. “The Gay Sweatshop was a very funny, not funny episode,” Sheridan says.

“I was getting rosary beads and bullets in the post. A review appeared in one of the newspapers with the headline: ‘Worse than Necrophilia’. That review got our grant cut.

“A councillor from Raheny was concerned that his son would turn gay if he went to the show. Another councillor came out and said, ‘I’ve been representing the people of Dún Laoghaire, man and boy, for 20 years, and as long as I’m alive there’ll be no heterosexuals, homosexuals or lesbians on our stage.’ He couldn’t understand why people were laughing.”

“I’ve just been directing a bunch of actors from Bow Street,” says Sheridan the Elder. “They’re so good. I could direct them all day. When the Factory started it felt like the same energy that was around the Project in the 1970s. They’re doing something, not just talking about it.”

As a theatre director, Sheridan, a fan of Jean-Luc Godard and Scandinavian cinema, was already thinking like a moviemaker. “It was such a small space when the Project was on Abbey Street,” he says. “So it was no sets, in the round, close up. Very like making early cinema.”

He left Ireland for firt Canada and then Hell’s Kitchen, in New York, in 1982, a period that would later inform his semiautobiographical 2002 drama In America. On his return to Ireland, a little more than 25 years ago, he exploded on to the movie scene – a late bloomer at 40 – with My Left Foot. The film would receive five Academy Award nominations, two Baftas and rave notices.

“There’s something about being abroad that focuses your mind,” says Sheridan. “If you get any opportunity you have to take it, and it was [the producer] Noel Pearson who gave me that opportunity with My Left Foot.”

The pair have lately reunited for The Secret Scripture. “And nothing has changed in 20 years,” Sheridan says, laughing. “We still fight and shout and argue. So hopefully that means it’s a great movie.”

“My mam fed us, and the lodgers and worked in the North Star [hotel]. My dad worked at CIÉ and would get out the ladder at the weekend and do jobs around the house,” he says.

“It took the pressure off the nuclear family, having lodgers. Maybe that’s why I’m always making families in my films. My parents used to take kids to the swimming baths. Maybe they were projecting the loss of my brother Frankie on to other kids. Or maybe they were just great socially minded people. Dad did the disco and the drama group, and the old folks’ group, and he worked three jobs. So the model growing up was socially conscious people who were active in their community.”

The loss of Frankie was a huge influence on In America and Sheridan suspects, on My Left Foot. “It was only during editing that I realised there were tons of scenes in which Christy Brown falls down the stairs. My brother Frankie fell down the stairs when he died.

“I wasn’t conscious of that making the movie. But that’s what making movies is. The movie tells you things. You think you’re making one movie, but you’re actually making something else you weren’t aware of.”

So film-making is basically the return of the repressed? “I think so. Cinema is uncivilised. It’s about cut. It’s about violence. It’s about all the nasty things below the surface. Theatre is civility. Cinema is kill, kill, kill, cut, cut, cut. We don’t really do that here. We do more of the talk, talk, talk. Sorry. That’s sounds a bit esoteric.”

Sheridan is very – and characteristically – complementary about the younger film-makers who have followed in his footsteps.

“I remember Fintan O’Toole rightly wondering why theatre hadn’t responded adequately to the Celtic Tiger,” says the film-maker. “But all the political dramatists have migrated to cinema. You look at cinema now in Ireland. Look at Gerard Barrett’s two films, Pilgrim Hill and Glassland. Look at John Carney. Everything they do is far superior to most plays. Look at the talent that’s out there. The standard of acting is sensational. That has completely changed since I started out. But I would still love to see more engagement with who we are right now.”

The 2015 Ifta Film and Drama Awards take place on Sunday, May 24th