Jem and the Holograms review: truly outrageous that this even got made 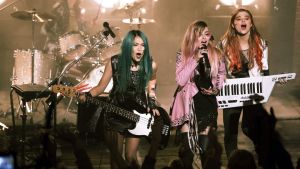 Film Title: Jem and the Holograms

As a film critic, I am expected to pretend familiarity with all source material from Car 54, Where Are You? to Nikolai Gogol’s Dead Souls. Is there any point trying to pretend that I know one end of Jem and the Holograms from another? Do you care?

Slightly younger, more female advisors tell me that the animation, though barely noticed here, ran noisily in the US throughout President Reagan’s second term. You may as well release a film based on the instruction manual for an Amstrad Z80.

Unless it was more prescient than anything in Arthur C Clarke, the original series must have moved in a very different world to this film. Jon M Chu and his writers have attempted (and failed) to study the slippery nature of contemporary internet celebrity.

The unnecessarily complex plot concerns the efforts of Jerrica Benton (Audrey Peebles), an orphaned teenage singer, to stop her aunt’s house from being sold. (Given that the too-rarely-seen Molly Ringwald plays that aunt, all viewers of a certain age will pray for her delivery from debt.)

Wearing a disguise, Jerrica posts a song on YouTube and rapidly becomes famous in the persona of “Jem”. There’s baloney about a robot invented by her late father and some romance with a bland dreamboat, but the film is at its least tedious when dealing with evil music mogul Juliette Lewis. Sadly, that’s what Ms Lewis does these days.

There is no worthwhile commentary on the flimsiness of modern digital renown. The songs are largely terrible. The images look as if they were shot on an iPhone that had recently been dropped in an unflushed lavatory.

The cast try hard, but there’s only so much you can do to energise an empty auditorium. Forbes reports that, in the US, Jem and the Hologams suffered “one of the worst opening weekends in box office history”.

It couldn’t have happened to a more deserving film.