Jadotville premiere a fitting finale to long campaign for recognition

‘Siege of Jadotville’ based on true events forgotten for many years, veteran says 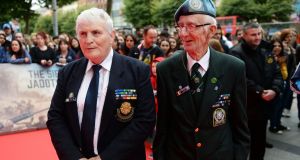 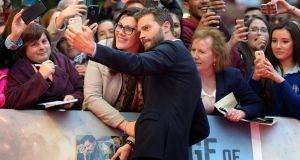 Siege of Jadotville actor Jamie Dornan outside the Savoy cinema in Dublin before the premiere. Photograph: Eric Luke/The Irish Times

Fifty-five years after an Irish Army company was besieged and ultimately captured by rebel forces in Congo, and two days after the veterans of that event finally won recognition from the State, the film based on the story has had its premiere in Dublin.

The Siege of Jadotville, directed by Richie Smyth and starring The Fall and Fifty Shades of Grey actor Jamie Dornan, opened at the Savoy cinema last night, with simultaneous screenings around the country.

“It’s a nice ending to a long campaign,” said John Gorman, who served as a 17-year-old private in the siege. Few Irish people ever knew about Jadotville, Gorman added, because they did not understand what had actually happened.

Forming part of a UN mission to keep peace in newly independent Congo, 157 under- equipped Irish troops in A Company of the 35th Infantry Battalion found themselves surrounded and under attack by 3,000 Katangan rebels. 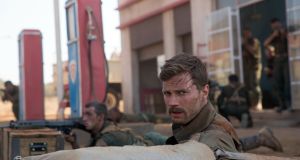 Under the command of Comdt Pat Quinlan, the Irish troops held out for five days, inflicting serious casualties on their attackers without losing any of their own men. It was the first overseas engagement by an Irish military force since Independence, and it ended with the company’s surrender to Katangan forces, who held them for five weeks before negotiating their release with the UN.

The returning soldiers found themselves viewed as an embarrassment by the Irish public and by many of their own comrades. Jadotville was brushed under the carpet and almost forgotten for many years.

However, last Saturday, a Presidential Unit Citation was presented at Custume Barracks in Athlone to A Company in recognition of the achievement of the soldiers who served at Jadotville, marking the culmination of a long campaign for recognition.

“Fifteen years ago I started going around local radio stations to talk about it,” Gorman said. “People were ringing in to ask what it was.” Gorman escalated his campaign, contacting Fine Gael’s then defence spokesman Dinny McGinley, who raised the issue in the Dáil. He reserved the greatest praise for former Fianna Fáil minister Willie O’Dea.

“He phoned my house, then invited me up to chat with him. Only for Willie O’Dea I would still be fighting for recognition.”

- The Siege of Jadotville is on nationwide release. It will be be available globally on Netflix from October 7th.