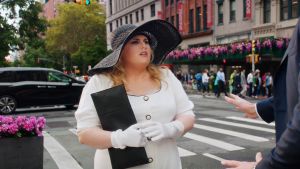 Rebel Wilson in ‘Isn’t It Romantic’

Growing up in Australia with her wine-swilling mother (Jennifer Saunders), Natalie learns not to trust the empty promises of Julia Roberts’s Pretty Woman.

As an adult, living in New York and working as an architect, she delivers an epic takedown of the entire soppy rom-com genre: “All those movies are lies set to terrible pop songs,” rants the marvellous Rebel Wilson.

“People waking up in bed with perfect hair and make-up? So unrealistic. There’s always some main chick and she’s super clumsy. In real life people would think she had muscular dystrophy. When there are two women in the workplace, they have to be mortal enemies. There’s no diversity. And don’t even get me started about the cliched gay best friend.”

And so, it comes to pass that Natalie bangs her head and wakes up in a romantic comedy, a place where the tinkling keys of Vanessa Carlton’s A Thousand Miles sneak up, where New York smells entirely like lavender, and where Natalie must choose between the attentions of the helicopter-owning dreamboat billionaire who keeps calling her beguiling (Liam Hemsworth) and her charming, goofy best pal, Josh (Adam DeVine).

“So the best friend you’ve always had incredible chemistry with is the guy for you?” her new gay friend intones sarcastically. “Who could have seen that coming?”

What a delightful wheeze. Isn’t It Romantic is a meta-rom-com that completely rips into every cliche of the genre while retaining an impeccable rom-com shape. Working from a lively, likeable screenplay by Erin Cardillo, Dana Fox, and Katie Silberman, director Todd Strauss-Schulson (maker of A Very Harold & Kumar 3D Christmas ) mines every trope, conventional music cue, and circumspect voiceover with good humour.

The jokes are good but they’re made better by Wilson’s delivery. Director of photography Simon Duggan (The Great Gatsby, Hacksaw Ridge) has fun with the Day-Glo. A fine supporting cast, including Priyanka Chopra’s irritatingly perfect romantic rival, stay light on their feet to the final dance number.

Diarmaid Ferriter: 1920 was a year of violence, trauma and terror in Ireland
7

IRA disappearances during the Irish revolution
9