Irish talent front and centre in the 2016 Oscar nominations

Saoirse Ronan and Michael Fassbender get acting nominations, while ‘Brooklyn’ and ‘Room’ both make the Best Picture list

Crew from Irish productions Room and Brooklyn will be getting ready for Oscar night as they get nods in a number of categories. Video: Academy Awards 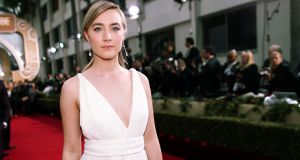 Saoirse Ronan at last Sunday night’s Golden Globe Awards. The Irish star has recieved a best actress nomination for her performance in Brooklyn, which also got a Best Picture nod alongside Lenny Abrahamson’s Room. (Photo by Christopher Polk/NBC/NBCU Photo Bank via Getty Images)

In an extraordinary day for the Irish film industry, both Lenny Abrahamson’s Room and John Crowley’s Brooklyn have been nominated for best picture at the Academy Awards.

Those mentions had been tentatively expected as were both films’ nominations for best adapted screenplay. More surprising was Lenny Abrahamson’s nomination for best director. Saoirse Ronan, pride of Carlow, was nominated as best actress for her turn as an immigrant to 1950s New York in Brooklyn. Brie Larson is in the same race for Room.

Abrahamson’s film, adapted by Emma Donoghue from her own acclaimed novel, ended up with four nominations. Brooklyn took three. Stutterer by Irish director Benjamin Cleary made the race for best live action short.

Kerryman Michael Fassbender is nominated as best actor for his performance as the title character in Steve Jobs. Sadly, Paddy Breathnach’s fine Viva, long-listed for best foreign language film, did not make the final five.

That hiccup aside, Irish cinema performed better than most domestic observers will have dreamed. This is easily the nation’s best-ever performance as regards Oscar nominations. Room, a searing study of motherhood under extreme pressure, and Brooklyn, a moving adaptation of Colm Tóibín’s fine novel, were both produced in cooperation with the Irish Film Board.

“I never saw best director coming,” Abrahamson told The Irish Times. “I know people say that, but it is true. That award is seen as an award for established directors and Room is not a showy film. I thought we’d get Brie. I thought maybe we’d get Brie and Emma. Best picture seemed to be slipping away.”

What did he make of the fact that he’d taken the spot most pundits had allocated for Ridley Scott or Steven Spielberg?

“I don’t know how to talk about that. That is amazing and very humbling. I chatted to Spielberg when I was last in LA and he spoke beautifully and was very complementary. But we thought we’d be in a seat at the back. Now it looks as if we’ll have seats at the front.”

Produced by Dublin-based Element Pictures, Room is Abrahamson’s fifth feature. He previously received acclaim for such pictures as Adam & Paul and What Richard Did. In any ordinary year, Brooklyn’s three nominations would be a banner headline. That it was only the second most successful Irish film in terms of Oscar nominations beggars belief.

This is Saoirse Ronan’s second Oscar nomination. She was previously listed in the best supporting actress race for Atonement in 2007.  "When we made Brooklyn, we had no idea of what was to come. It is the most personal film I have ever done, the hardest one too,” she said in a statement. “This has all been a dream. To see how the film has been embraced has been heartwarming. Thank you so very much to The Academy - you are a group of people I respect greatly and to be recognised by you means so much. Thank you!"

Close to speechless
James Hickey, CEO of The Irish Film Board, was close to speechless at the result. “It is just fabulous,” he told this paper. “I am not sure how I can express it. It is the most extraordinary, exciting moment in Irish film. We were watching it in the Board. We were cheering. We were jumping up and down.”

The news triggered a statement from President Michael D Higgins. “I am delighted to send my warmest congratulations to the Irish nominees on the occasion of the unprecedented strong Irish representation at the Oscars 2016,” he said.

The nominations table is headed by Alejandro González Iñárritu’s The Revenant with a mighty 12 mentions. Mad Max Fury Road follows with 10. Iñárritu’s frontier epic now looks like the favourite for best picture, despite the same director’s Birdman having won last year.

To this point, there had been no clear front runner in the most important competition. Tom McCarthy’s Spotlight, a study of the Boston Globe’s investigation into clerical sexual abuse, had been regarded as the most likely to triumph. But, after winning a Golden Globe and securing so many mentions today, The Revenant must surely be ahead. The film is only two short of the historical record for most nominations.

Michael Fassbender will have resigned himself to the fact that Leonardo DiCaprio, who plays a vengeful trapper in The Revenant, is destined to win best actor. It is seen as his time and he put himself through great discomfort shooting Iñárritu’s film. Having already won a Golden Globe and a host of critics’ awards, Larson is a strong 1/3 odd-on favourite with most bookies. Ronan, who recently took best actress at the New York Film Critics Circle, looks like the only other person who can beat the American actor.

Notable exclusions
The biggest surprise was probably the exclusion of Todd Haynes’s Carol from best picture and best screenplay. Much admired since its debut at the Cannes Film Festival, the picture did manage six nominations, but somehow lost out on the most important of all. Ridley Scott’s The Martian scored seven nominations. Steven Spielberg’s Bridge of Spies racked up six.

Sylvester Stallone makes a return to respectability with a nomination in the best supporting actor category for Creed. Returning triumphantly as Rocky Balboa, he looks like an emotional favourite in that category.

Within minutes of the announcement ending, muttering began about the lack of racial diversity in the acting nominations. For the second year running, there were no performers of colour among those mentioned. Michael B Jordan, the African-American star of Creed, looked like a decent outside best for a best acting nod. As things have transpired, the Academy’s PR department will be fire-fighting from now until the ceremony on February 28th

The main nominations are: