Get Santa review: Santy in the slammer 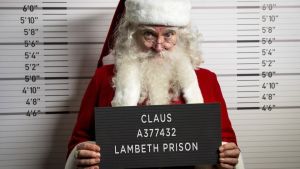 Soon after, Santa is sent down for attempting to rescue his estranged reindeer from Battersea Cats and Dogs Home, and must learn to survive prison while new chums Steve and Tom attempt to save Christmas.

When last we caught up with hip young British auteur Christopher Smith, purveyor of such dark genre delights as Creep, Triangle and Black Death, he occupied the intersection in a Venn diagram comprising sets marked Ben Wheatley and Robert Heinlein. Imagine our surprise to note that the same writer-director is responsible for this unabashedly seasonal schmaltz.

Get Santa is an odd confection. The cast is populated by Proper Thespians who are almost too subtle, too nuanced, too, well, talented, for this kind of malarkey.

At its best, the film is a fish-out-of-water comedy built around Santa’s attempts to fit in with hardened criminals. (Yes, he strolls the corridors to the strains of Straight Outta Compton.) But just when we’re primed for a very kitchen-sink Christmas, Smith’s film goes to Hollywood with a surging John Williams-alike score (from Ilan Eshkeri) and wide-eyed miracles. Except on a lesser budget than we’re accustomed to with this subgenre.

There are enough welcome details in the margins to keep viewers from fidgeting: a likeable if unevenly paced story, some inventive Lapland-related steampunk, and character actors one would happily crawl over jagged holly to see.

It helps, too, that after Nativity 3, every Christmas film is sure to look like a masterpiece.