All-round yank David Ayer talks South Central LA, navy discipline and true-grit cinema with Tara Brady. And what if he hadn’t become a director?“A betting man would have said dead or in prison.” 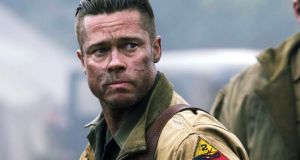 David Ayer must be the only filmmaker in the world who can look manly while stirring and sipping peppermint tea. Speaking in a low, deep voice, the talented writer-director behind Harsh Times (2005) and End of Watch (2012) smiles more than you might expect, yet seldom makes eye contact.

He has, of course, plenty to smile about today: his new film, Fury, starring Brad Pitt and Shia LaBeouf, has just knocked Gone Girl off the top spot at the US box office and is all set for a glitzy London Film Festival premiere.

A drama set mostly in a Sherman tank during the dying days of the second World War, Fury is something that Ayer, a US Navy veteran, has wanted to make since he was a kid: “But only in the same outlandish way that I wanted to be an astronaut who goes to Mars.”

He didn’t have too many supporters; war movies, according to studio logic, are unpopular. But then, Ayer is accustomed to flying in the face of convention.

“When I wrote Training Day, I knew it would never get made. They weren’t making cop movies back then. That genre was DOA. No one cared. I was just writing down crap I was hearing on the streets of LA when I was running around not being a good taxpayer. Lo and behold, it got me work. But it still took years to get made.”

By the time Training Day earned Denzel Washington an Oscar, Ayer had already found work as a screenwriter on U-571, The Fast and the Furious and Dark Blue. He wasn’t an overnight success. He was working as a builder when he stated writing and describes his early efforts as “piss awful”. He’s still shocked that he made it. But at first, he says, he was just happy to have a job.

“It did finally get to a point that I had to transition into directing,” he recalls. “Writing was like being a house painter. You don’t get to choose the colours. It’s not your house. Not your paint. Sometimes not your taste. That can be soul-killing.”

Fury marks a kind of complete circle for Ayer. Born in Illinois and raised in Minnesota and Maryland, Ayer grew up as part of a military family. Both his grandfathers served in the second World War but never talked about it. “My family have always been good at fighting in America’s wars. And even though those experiences might have shaped them, they left those wars overseas. It’s part of what made me curious.”

The younger David Ayer was, by his own account, a nogoodnik teen who was kicked out of home by his parents before moving in with a cousin in South Central Los Angeles. It was not a particularly desirable zip code.

“Anyone who knew me back then would be shocked with what I’ve put together with my life,” says Ayer. “A smart betting man would not have risked his cash on this happening. A betting man would have said dead or in prison.”

He was honourably discharged from the navy at the end of the Cold War and would still miss the life if he hadn’t made it as a film director. “It’s the environment I’ve found to be most like the military. Everybody is working together toward a common purpose. There’s a hierarchy and a technique and a craft and a discipline. A film set is a very high functioning machine.”

Back in the can

He has taken a convoluted route, but the former sonar technician from the nuclear submarine USS Haddo has finally found his way back into a tin can. “I know, right?” laughs Ayer. “That experience shaped my ability to tell a military story. The experience of living inside of a weapons system. The details. The responsibilities. It definitely gave me personal insight into what being part of a tank crew might have been like.”

For the Fury shoot, theAyer commandeered equipment and expertise from the Bovington Tank Museum in Dover and studied the movements of various divisions as they moved through northern Germany in early 1945. Realism was rigorously considered - Shia LaBeouf slashed his own face to produce an authentic scar; a Tiger 131, the last surviving operational Tiger I tank, is given pride of place and the cast underwent boot-camp training.

“There’s often a sort of sepia patina to war films,” says Ayer. “Aw, gee whizz, let me tell you about Sally-Sue back home. But when you talk to veterans and get first-hand accounts, they were no different from us. They were ribald and tough and cynical.

That energy is typical of Ayer’s milieu. Whether his subjects are dirty cops or are living within second World War artillary artillery, this very American director frequently focuses on the men and women who represent power and might, but, have no power as individuals. They work to protect society yet they don’t belong to it.

“I find that isolation fascinating,” says Ayer. “People are entrusted by society to protect us. Here’s your government-issued gun. This gun is taxpayer property. We’re going to give it to you and you’re going to go kill people. Here is the list of rules. You’re going to have to interpret those on your own. And if you make a bad call we’re going to destroy your life. Have fun.”

nFury is out now on general release. See full review on irishtimes.com/culture/film

The Movie Quiz: What is the completely made-up tagline for Jaws 19?
6