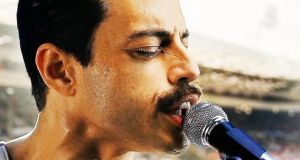 If you thought Rami Malek’s teeth were big in Bohemian Rhapsody, consider this: they could have been even bigger. The giant prosthetic choppers the actor wore to help bring Freddie Mercury to life in the hit Queen biopic were made in different sizes, including a set that were the actual size of Mercury’s teeth, but they were a little too large for Malek’s face.

This and other biting tales came from an interview with Chris Lyons, toothmaker extraordinaire with Fangs FX, a British company. The 55-year-old artist has been making teeth for movies and TV shows for decades, amassing hundreds of credits and fitting stars like Tilda Swinton, Meryl Streep and Johnny Depp with memorable creations. He even made gold fangs for a Dobermann in a Kanye West video.

While Lyons’s work usually plays a supporting part in productions, it moved into a starring role in the Queen film. In an early scene Mercury’s bandmates-to-be are sceptical about his ability to be a frontman with such a mouthful, but Mercury suggests that having four extra teeth, which gave him his overbite, is a musical benefit.

Here, Lyons, who fabricated discoloured teeth for Malek in the prison-drama remake Papillon, talks about creating a set of Freddie Mercury teeth in gold, contributing to the recent Star Wars movies, and making a larger-than-life replica of Björk’s mouth.

How do the teeth work to shape Rami Malek’s mouth the way they do in the film?
They’re big teeth and they’re a little bit buck, so they stick forward slightly. When they go in Rami’s mouth it pushes his lip forward, to give him that overbite look, and makes it look more like Freddie’s mouth. Freddie was very self-conscious about his teeth and was often trying to hide them with his lip. Rami loved that, because he had to work to hide these teeth as Freddie did.

What are they made of?
Dental acrylics, basically. If your nan had false teeth, and she takes them out and puts them in the glass beside her bed, it’s similar material to that. But each tooth has been handmade in layers, to get the colours and to fit Rami. Nothing’s stock.

And how do they fit on?
We don’t use fixatives. They just go on the front of his teeth, behind his lip. That’s it. Because the minute you go over the biting surface of your teeth it will affect the way you talk, and you won’t be able to close your mouth. Whereas Rami could close his mouth fully, because none of my teeth were on the biting surface of his. They literally just clip in and out in seconds. We did varying sizes, going all the way up to Freddie-sized teeth. When we did the first big test and presented it to Bryan Singer [the film’s original director], that’s when we realised if we went for the full-sized teeth they were going to be far too big on Rami, because of his size. We scaled it down so that everything matched with Rami’s face and features.

The teeth for this film are big, but you’ve made a wide range of tooth sizes throughout your career
We can make teeth as thin as 0.1mm, or fangs that are 1in [2.5cm] thick. And we make gold teeth. Rami asked me to make a set of Freddie teeth in gold for him. I made him a little stand for them. He wanted to keep them at home, because it’s not a common character to play.

What would you use the really thin teeth for?
If you’re playing a character who’s living in the wild or a vagrant, or something like that, your oral hygiene is pretty bad. So instead of painting on your teeth, which would affect continuity, we can take a thin material, paint that up, you clip it in and suddenly your teeth are discoloured. When we did Tilda Swinton in Suspiria, she’s got them in. She’s one of my regular customers.

What kind of tooth work have you done that we wouldn’t notice?
I’ve done all the new Star Wars and their spin-offs, and I haven’t noticed one set of our teeth in any of the films yet.

What was one of your most difficult undertakings?
That would be on Tim Roth, for the film Youth without Youth. The shot was going to be, he’s in hospital and the doctor was going to put his finger in his mouth. And they wanted every tooth in his head to be loose, like wobbling. It took me two months to work out how I was going to do it. We must have made four or five different sets before being happy enough with one we could present. I couldn’t believe it worked in the film.

And what about a more inventive task?
We did teeth that were 30 times life size for the Björk music video Mouth Mantra. They wanted to put a camera inside her mouth, as if they were filming from inside outward. So it had to be her teeth, her gums, the roof and the floor of her mouth, 30 times life size. I was supplied with a cast of her mouth. It got digitally enlarged. Then we had to replicate it and get it in the same tooth and gum colours as hers. – New York Times

‘This image of a man tarred and feathered, driving a train out of rage, just haunted me’
6

The old television that brought down one village’s broadband
9