Foxtrot review: Surrealism and slapstick combine in an unforgettable masterclass

Every single sequence in this controversial Israeli film is thrillingly unexpected 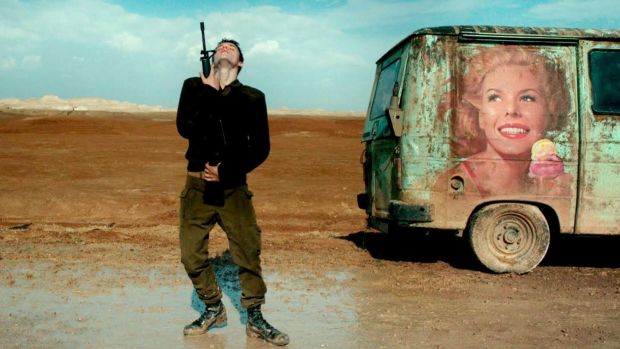 A scene from ‘Foxtrot’

An ominous knock on the door of a well-appointed Tel Aviv apartment. Soldiers descend in a Bunuelian rush. They have come to inform the Feldmans their son Jonathan has been killed in the line of duty. Dafna Feldman (Sarah Adler) faints. Michael Feldman (Lior Ashkenazi) freezes. With frightening efficiency, three soldiers drug Dafna before explaining to Michael that funeral arrangements are sorted and a helpline is available, as well as reminding him to keep hydrated. They give no details about how or where Jonathan has died.

Elsewhere, at a lonely and ramshackle military station codenamed Foxtrot, consisting of a lookout tower, a repurposed ice-cream truck and a shipping container, Jonathan is Beckettian-bored with three other soldiers. Camels pass occasionally. Wurlitzer music plays on the radio. And then, explosively, tragedy strikes.

Hellerian surrealism. Slapstick comedy. There are many tones and textures set against two backdrops in Samuel Maoz’s long-awaited follow-up to Lebanon. From the virtuoso opening scene – the surreal arrival of Israeli soldiers who can only be the bearers of bad news – every single sequence is thrillingly unexpected.

Every technical aspect of the film, which won the Grand Jury Prize at the Venice Film Festival, is note perfect. Lior Ashkenazi adds another dimension in every scene he is in. Giora Bejach’s nimble camerawork effortlessly dances between pained close-ups and off-kilter medium-long composition. Even the family dog performance proves a masterclass in canine acting.

The film was hugely controversial in its native country, where it was derided as an “anti-Israel narrative” by minister of culture Miri Regev (she hadn’t seen the film when she made the comment), amongst others. Regardless, Foxtrot was so damned good it was still Israel’s official Oscar entry.