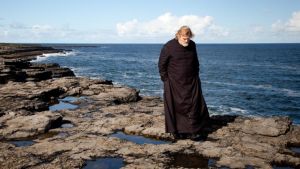 John Michael McDonagh’s problematic follow-up to The Guard begins with an ingenious, arresting coup de cinema that opens up all kinds of satirical possibilities. The predictably flawless Brendan Gleeson plays Father James Lavelle, a decent priest serving the needs of an absurdly colourful Sligo community, whose world is upended by an unexpected encounter in the confessional.

A troubled parishioner – unseen by us, but apparently known to our hero – explains that, having been abused by clerics as a child, he intends to exact revenge by killing James in one week’s time.

There is a terrible logic to his scheme. The annihilation of a guilty priest will provoke only so much rending of garments. The murder of an innocent man will, however, really hammer home how troublesome any association with the discredited Catholic Church has become.

Like Montgomery Clift in Alfred Hitchcock’s I Confess, James feels that the sanctity of the confessional prohibits him from revealing what he has been told. He begins a round of conversations with the locals – dizzyingly varied and madly flawed – as the clock ticks down towards his appointment with eternity.

Taking a conscious step away from the ironic frivolity of The Guard, McDonagh has mentioned Robert Bresson’s Diary of a Country Priest as an influence on Calvary . And there is certainly a fine film about an unusual, decent priest fighting to get out of this somewhat unwieldy construction.

A widower with a grown daughter (Kelly Reilly), Father James is saddled with an unexpectedly tangled personality, and Gleeson works hard at teasing apart each and every knot. We could have done without the inevitable, lingering drink problem – the sort that defines your stereotypical “rogue cop”– but James’s unusual family situation allows him private insights rarely accessible to the parish priest.

Unfortunately, that core drama is overpowered by the clumsily emblematic nature of the protagonist’s perambulations about a townland that may as well have been called Little Irelandia. Far from recalling the harrowing realism of Bresson, Calvary, for most of its duration, kicks up memories of those shouty agit-prop plays from the 1970s in which every character represented a failing of the state or a victimised proletarian sub-group.

Isaach de Bankolé plays an African immigrant doomed to be the scapegoat for other people’s sins. Chris O’Dowd is a damaged butcher who may have raised his hand to his wife. Aiden Gillen and Dylan Moran essay the two least subtle embodiments of post-Celtic Tiger Ireland: the former is a coke-snorting doctor, the latter a vulgar financier who now poses as an ascendency toff.

Some of the social avatars have, however, been badly miscast. It really is asking too much to have us believe that an incarnation of Dylan Moran – the Picasso of dishevelled indecision – could be any sort of financial Master of the Universe. Another actor is too young. At least one more is too sleekly glamorous.

But the real problem is with that didactic, meandering script. The story propels us from one broadly drawn cipher to another without allowing proper momentum to build. Nor does any coherent criticism of contemporary Ireland emerge. McDonagh employs a scattershot nihilism that admits little hope, optimism or reasoned analysis.

Still, raw anger has a compelling power in itself. And it can’t be denied that Gleeson’s touching, nuanced performance ultimately holds the disordered elements together. Observing his performance is like watching a gifted schoolmaster quietly and subtly calming a warring cadre of disobedient students.

Come to think of it, isn’t that what Gleeson once did for a living?